Eleven warrants issued, almost a dozen drug lines smashed, half a million pounds’ worth of counterfeit items seized, nearly 200 traffic offences issued, three cannabis farms discovered and 63 arrests for a range of offences – it’s all in a day’s work for Rochdale police.

A range of activity was carried out in Rochdale on Thursday (28 April) as part of Operation Avro, a targeted investigation into county lines drug networks.

Officers began the emphatic offensive on local criminality shortly after midnight and had made 19 arrests before dawn had even broken across Rochdale - including 10 suspected drug dealers who were taken to custody while the new county lines team stung 11 drugs lines operating in the town.

As police dismantled the drug lines, they sent a stark and clear alert direct from the compromised phones to their thousands of customers that included the message: "your number has been identified as being in contact with a County line… and we have taken control of this line."

Contact numbers offering help and advice for vulnerable people being forced to sell drugs - or those needing support for drug use - were also shared as part of the notice.

Enforcement continued across the town throughout the day, with traffic police embarking on two roads policing operations that saw a total of 196 offences acted on - including 41 speeding offences - with five arrests made and a dozen vehicles seized.

Partners from Rochdale Council also joined GMP throughout the day; assisting with licensing checks on local taxi firms, as well as weapon sweeps, meeting with local residents to discuss housing issues, and joining the force at local schools to discuss the impacts of knife crime with students.

Police also assisted colleagues at the Metrolink in patrolling the local network and engaging with 575 passengers to disrupt anti-social behaviour, enforce payment of tickets - with 57 penalty notices issued - and inspect the newly-introduced knife arch at Newbold to prevent the possession of dangerous weapons. 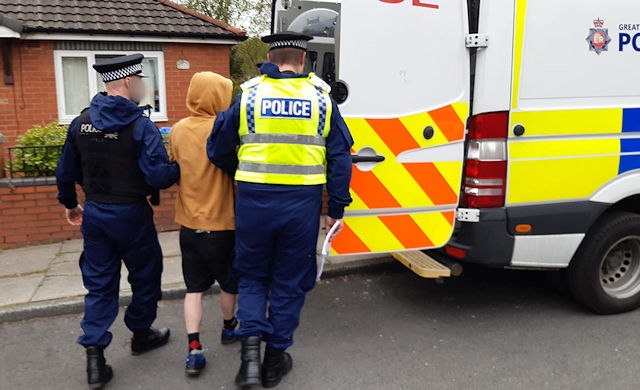 A suspected chop-shop was also discovered by neighbourhood officers who found suspected stolen vehicles and parts inside of an industrial site.

A spokesperson for GMP said: “Our custody sites remained a hive of activity as the day progressed with arrests being made late into the evening for offences such as domestic violence, robbery, burglary, and hate crime.

“A series of 16 suspected shoplifting and frauds targeting elderly women in four of our boroughs that saw us arrest a woman in her 50s on the back of an appeal we made to the public the previous day.”

The total of arrests stood at 63 by the conclusion of the 24-hour affront. Operations and warrants executed throughout the day have been as a result of intelligence and concerns received from members of the public.

Anyone with information or suspicions about activity in their local area is asked to contact police.

Information can be passed on online - if able - via the LiveChat facility on GMP's website, or by dialling 101. Always call 999 in an emergency.

Details can be passed to the independent charity Crimestoppers on 0800 555 111.