You are Here: Home » News » News Headlines » How Rochdale’s ‘gothic masterpiece’ town hall is being restored to its full glory 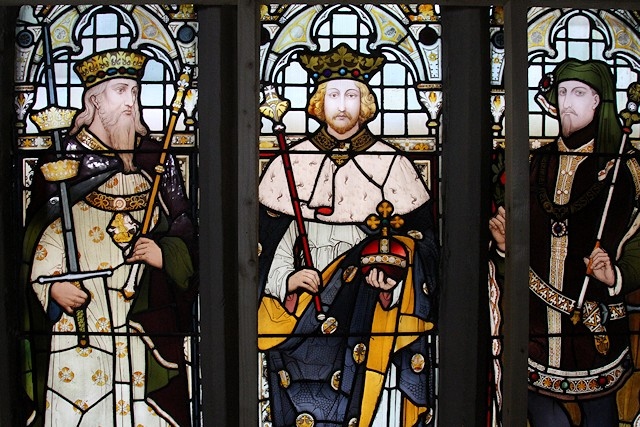 Often described as a ‘neo-gothic masterpiece’, Rochdale’s Grade-I listed town hall is considered to be one of the finest municipal buildings in the country. Designed by William Crossland, it opened in 1871 as a symbol of the town’s industrial might – its ornate stylings are rivalled only by the Palace of Westminster according to Historic England.

While its imposing, quasi-medieval magnificence marks it out as one of the most impressive buildings in the north, the ravages of time have inevitably taken their toll. Problems blighting the building over recent years include a crumbling drainage system and a leaking roof, while a digital scan by Salford University revealed a treasure trove of forgotten rooms and obscured features.

But now a £16m restoration of the Victorian gem –  part funded by the National Lottery Heritage Fund – is well underway. Around two thirds of the town hall is being revamped under the first two phases of the project – with a third possibly in the pipeline.

Scheduled to reopen in 2023, the revamp will restore many period features within the building and create a new permanent exhibition as well as boasting a heritage skills studio where local people can train in sought-after conservation skills.

Karen Heverin, of Historic England, says the heritage body is ‘incredibly supportive’ of the restoration programme.

“It’s brilliant to see a project that’s bringing this fabulous building back into community use,” she said.

“It’s an amazing building, it’s got such incredible craftsmanship and the work you can see is really suited to the brilliant architecture and decorative detail we have got in this building.” The Local Democracy Reporting Service was invited to take a tour of the building, which sits in the heart of the town centre – for a sneak peek of the progress to date.

Approaching the Mayor’s entrance, visitors will notice work to install a lift shaft inside the hall’s landmark clock tower. You then arrive in the Small Exchange with its stone angel corbels – figures that jut out to support the structure – and decorative floral frieze. From here, it is on to the Mayor’s Reception, where careful and painstaking work is taking place to restore ornate ceiling panels to their original splendour.

Featuring illustrations of swallows, the panels are yellowed with age, with each one taking around five hours to clean up and remove the historic layers of varnish before the final finish is applied. Swallows are just one of the creatures depicted in some way at the town hall, with the sharp-eyed sure to also spot the squirrels, eagles and even lions among the plethora of species.

Also in situ are four corbels representing four local dignitaries from the time of the hall’s opening – including the town mayor and the designer Crossland himself. Next door is the Mayor’s Parlour with its vivid stained-glass windows depicting the seasons through the 12 months of the year.

As in the reception room, meticulous work will be needed to return the decorative walls – resplendent with songbirds – to their original lustre. A small area has already been completed, offering a tantalising glimpse of how the finished version will look.

Electrics have been stripped out in readiness for the volunteers who will soon begin cleaning and timber panelling under supervision. They will also play a part in transforming the old council chamber, where a glazed partition has been removed, to be ‘repurposed’ further down the line. 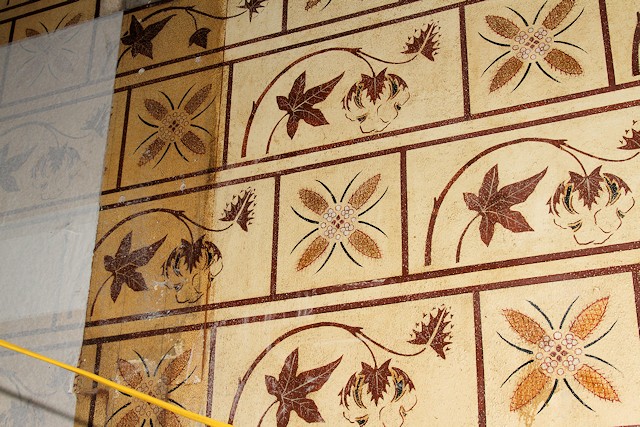 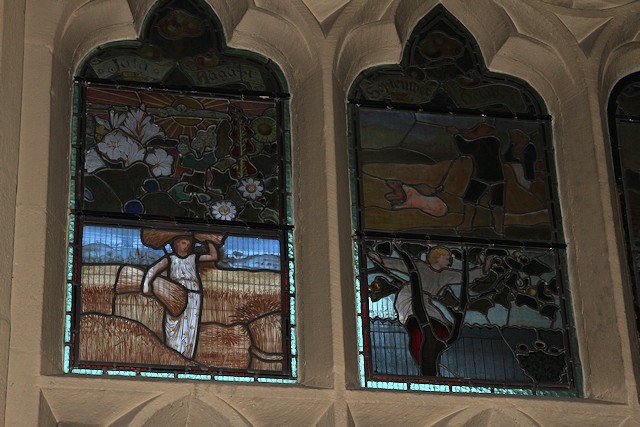 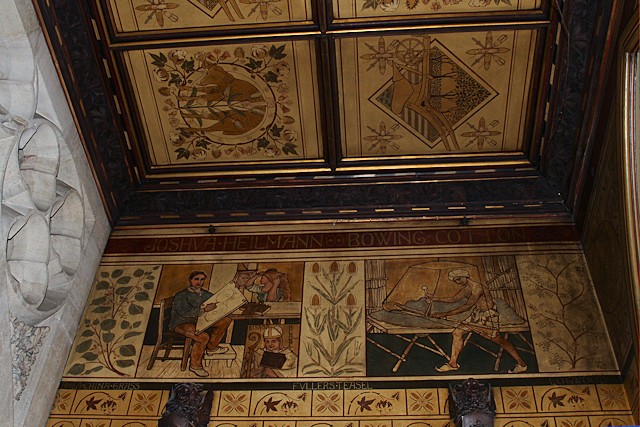 This room celebrates the textile industry from the cotton fields of Egypt to the Victorian mills of Rochdale – with the decor featuring names such as James Hargreaves, Samuel Crompton and Lewis Paul. From here it’s through to the Welcome Gallery, which is earmarked to become a new exhibition space. A ‘lot of stripping out and dirty work’ has already taken place, here – including the removal of a lower ceiling.

Then it’s up to the Great Hall, where York Glaziers Trust are restoring the stunning stained glass windows – depicting an unbroken line of rule from William the Conqueror to Queen Victoria – to their original brilliance. The trust has a three-strong team based in Rochdale tackling ‘serious structural problems’ with the windows, before any cleaning-up can take place. 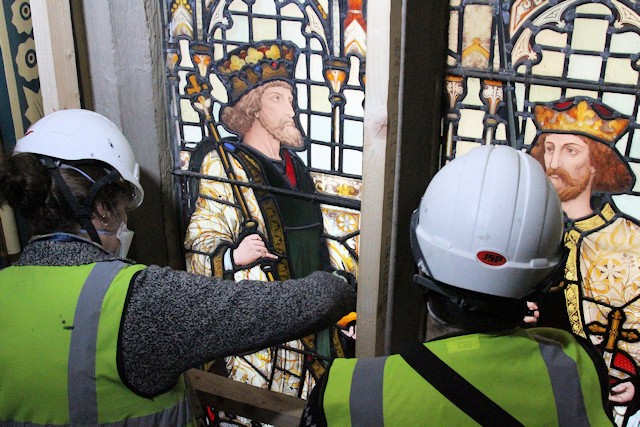 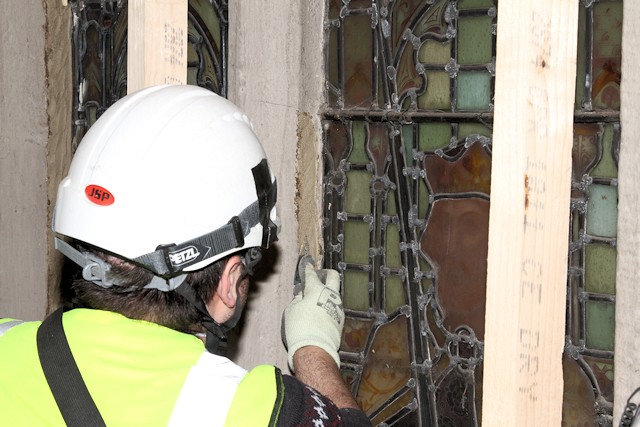 A tricky job, but Nick Teed, of the trust, says the project is ‘now well on the way’. Work on the nine ‘enormous windows’ of the Grand Staircase has been completed while the Great Hall is not too far behind.

“It’s a fantastic project,” says Nick. “It’s great to work on a building like this which is absolutely lavish with decorative and architectural detail.”

He also enjoys working alongside the other tradespeople and craftsmen who are rejuvenating the town hall. “It’s a real privilege to work on a building like this,” he adds.

Those with a head for heights can then climb the scaffolding to the upper level of the Great Hall, where its cavernous scale can be truly appreciated. Progress here is in its early stages with careful work needed to ascertain how best to clean up the delicate roof tiles, before they can be properly restored. 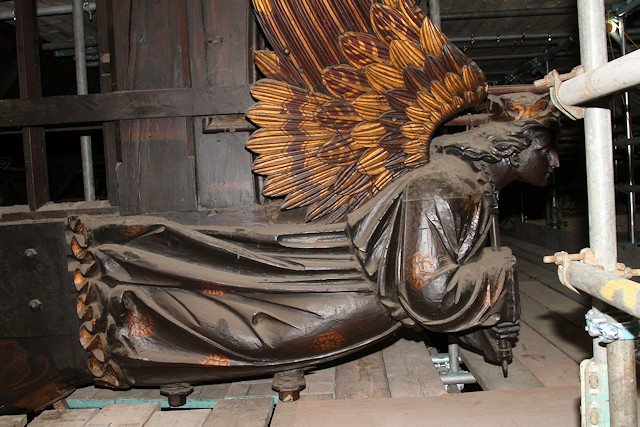 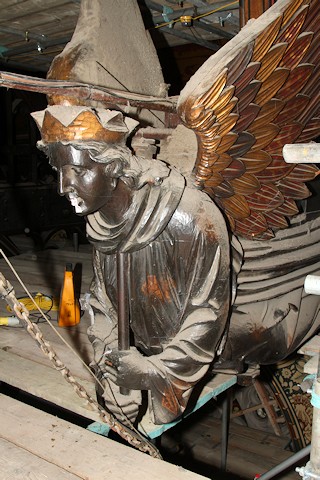 A similar approach also needs to be taken before the fine detail can be brought out on the hugely impressive angel carvings, fittingly found in the town hall firmament. For Caroline Storr, heritage engagement manager at Rochdale council, the project represents a ‘fantastic opportunity to showcase the very best’ of the town.

“I think the town hall has been piercing the skyline of Rochdale for the last 150 years and now it’s our opportunity to let people into this beautiful building that was made – not just for the people of Rochdale – but actually for people across the country if not the world,” she says.

“Its architecture and craftsmanship inside takes its symbolism and history from motifs across the world, so our aim is that it’s truly representative of everybody. It’s really important because it allows Rochdale to be put on the map as a place of historic interest.”

Caroline recalls how the town hall was once likened to an ‘oriental temple of intoxicating elegance. “I suppose what we are trying to do is make the building intoxicatingly elegant once more,” she adds.

And she believes the revitalised town hall will make Rochdale a real destination, together with attractions such as Touchstones Heritage Library, Fireground and the Rochdale Pioneers Museum.

She adds: “When we reopen it will tell the story, not just of the town hall, but as a lens into the last 150 years of Rochdale’s history.”

Mark Taylor, senior site manager for HH Smith, is similarly enthusiastic. “It’s an amazing project to be involved with,” he says.

“The more we work within the building and work around it, the more hidden features we see something different. It’s just an amazing space.” A stonemason by trade, he describes the restoration as ‘the pinnacle’ in his eyes.

“I would love to try and rebuild something like this but nowadays we just don’t build them like this, it’s one on its own really,” he adds. “It’s a pleasure to drive to work to this job. It’s got literally everything this project when you think about it.”