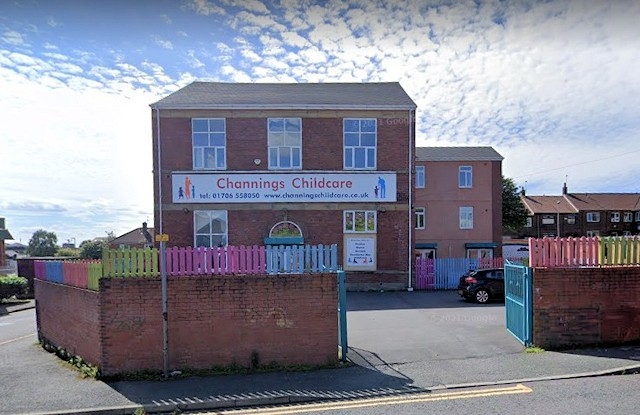 A nursery has closed its doors for good following a ‘devastating’ Ofsted report which found safeguarding failures had put children ‘at risk of harm or injury’. Channings Childcare says its premises, in Whitehall Street, Rochdale will now be sold as it does not have the resources to develop any further, despite having ‘put right’ the issues raised.

Managers insist there have not been any safeguarding incidents at the nursery but say the report uses ‘ruinous language’ to describe minor irregularities and errors in reporting. Previously rated as ‘good’, the nursery has been branded ‘inadequate’ by the education watchdog after officials carried out an inspection last month.

A new report reads: “The arrangements for safeguarding are not effective. Managers and leaders have failed to recognise and report serious concerns about children.  These children have not been safeguarded effectively.

“Most of the staff team have not accessed up-to-date safeguarding training and are unable to explain general signs and symptoms of abuse, or the reporting procedure outside of the nursery.” It adds that some staff are unaware of how to handle children appropriately, and the manager’s failure to react promptly to this puts them ‘at risk of harm or injury’.

While the report acknowledges that children enjoy their time at the nursery, it notes that the curriculum is ‘very general’ and does not take into account all youngsters’ individual needs.

It continues: “Some children are extremely distressed and upset and this has an impact on the learning experience of other children. Staff attention is taken away from groups of children for long periods of time.

This means their learning is interrupted and opportunities to develop concentration are lost.  Inspectors described routines at the nursery as being ‘sometimes chaotic’, resulting in ‘children becoming confused about what is happening next’.

Opportunities for youngsters to develop independence were also found to be lacking.  “Older children cannot access the bathroom when they need to, as the door is kept closed,” the report adds.

“This means that children who are toilet training have frequent accidents and are not supported properly in their self-care needs.”

Channings Childcare – which also runs five other nurseries across Rochdale and Oldham – has confirmed its Whitehall Street facility is now closed.

A statement reads: “Following a challenging Ofsted inspection, and a devastating report, we made the decision to close our Rochdale nursery from 22nd April 2022. This is a permanent closure and the building will be sold.

“There has not been any safeguarding incident at this nursery but the report uses the same ruinous language to describe minor irregularities and errors in reporting.

It continues: “We do not, and never have, closed the toilet door so that children cannot access. The door was pushed closed because of a misunderstanding and toilet training children would never be left to access the bathroom alone.

“With the help of the local authority, all the issues we were required to put right were completed but, with the issues we currently face with recruitment and absenteeism, we did not have the resources to develop further.

“Many thanks to our parents who have been hugely supportive especially in their concerns for our staff. “

A spokesperson for Ofsted said: “Channings Childcare Ltd was inspected on 17 March 2022 and received an inadequate judgement for the reasons set out in the inspection report. On 12 April the provider informed Ofsted of the decision to permanently close the setting.”