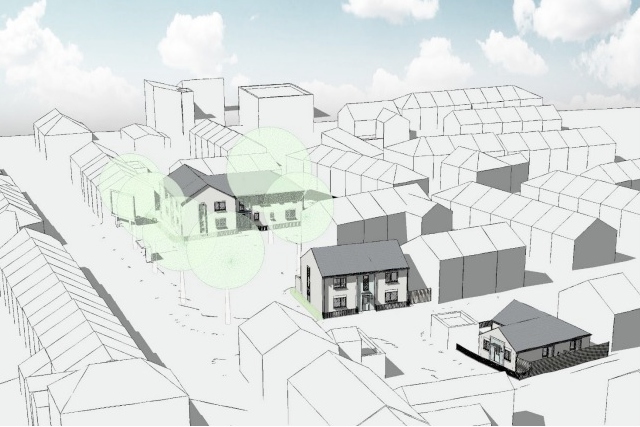 New flats for homeless people could be built across three ‘underutilised’ sites off Whitworth Road in Rochdale – including a disused play area and ‘dilapidated’ council-owned garages.

Designed to a ‘high standard that will significantly enhance the character of the area’, it includes a pair of two-storey blocks – housing eight and four flats respectively – as well as a bungalow providing two homes.

The plans have been submitted by Cornerstone Place, a social enterprise which aims to end street homelessness in the UK by 2030 by working in partnership with homelessness support charities.

The scheme has been developed in conjunction with a Rochdale-based homelessness charity, Stepping Stone Projects, which intends to operate the facility once it is complete.

A document submitted with the planning applications notes that homelessness in Rochdale is ‘very high’ and increasing in the wake of the Covid-19 pandemic.

And it stresses the importance of widening housing choice to meet the needs of residents – especially the homeless.

It continues: “Given the nature of the accommodation and integrated management supervision for future residents, the proposal would contribute to addressing local homelessness, which according to numerous independent data sources, exceeds the national average.

The document goes on to note that the type of accommodation being proposed would address ‘key social issues facing a particularly vulnerable group’.

And it explains how the scheme aims to ‘maximise the available underused land’ in a way that ‘would improve the image of this part of Whitworth Road’.

Each apartment would meet national space standards and include a living room, kitchen / dining area and bathroom.

There would be no dedicated vehicle parking on site, however nine cycle stands would be provided to the west of Block A.

It is anticipated that residents would likely not to drive or own their own vehicle. However, the site is said to ‘benefit from excellent access to nearby services and facilities, including public transport’, all of which are ‘within walking distance’.

Demand for a maximum of five staff parking spaces should be ‘satisfactorily accommodated on-street in the vicinity of the site’.

The Grasmere Street car park would also be retained as part of the proposals. The applicant claims this would offer ‘ample opportunity’ for visitors to park next to the site.

In conclusion, the document says the proposal would result in ‘a far more effective use for a brownfield site, with a number of tangible benefits’.

“The development would revitalise an under-utilised site whilst directly addressing homelessness,” it adds. “In combating this social issue, the development proposal will contribute to the much-needed diversification of housing in the borough.”

Rochdale council will decide whether to grant planning permission for the scheme.