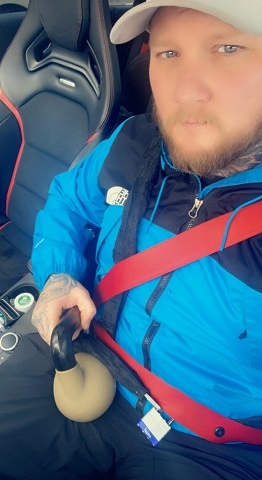 Former butcher and restaurant owner Darren Rushton is gearing up for his latest charity challenge – cycling from the very most southern point of England to the very most Northern part of Scotland.

Veteran Darren plans to undertake the 1,000-mile Cycle from Land’s End to John O’Groats towards the end of July, estimated to take him around two weeks to complete.

The challenge will raise funds for mental health charity CALM – Campaign Against Living Miserably. CALM provides support for anyone in need to prevent suicide, the single biggest killer of men under 45 in the UK and the cause of 18 deaths every day.

Darren – who has raised thousands for CALM over the years with various charity challenges – said: “This is by far going to be the most challenging thing I’ve ever done in my life and this task is really going to put me through the most stringent of tests I’ve ever had to endure.”

35-year-old Darren has been sponsored by Rochdale Eats, the local answer to JustEat, but other sponsors will be welcomed.

He added: “If there any companies out there that would like to sponsor me and provide me with stuff for this journey then that would be greatly appreciated. This is going to be a tough journey so all the support I can get will be amazing.

“I love a good challenge and this is off the scale, but it’s nothing compared to what other people are going through. I will smash through the pain and mental barriers and show people what they can do if you put your mind to it and look forward.”

The former Cryers butcher most recently carried a staggering eight kilogrammes of weight around his neck for an entire month, which culminated in a burger challenge at his Cheetham Street restaurant, Heroes Burgers.

Sadly, Darren announced in May 2022 that after just a few short months, Heroes would be closing due to the current financial crisis.

He said: “The cost of electric alone is far too great to justify paying, the price of meat has gone up twice since I’ve been open, and I can’t justify another price increase. Everybody is struggling with rising costs and take aways and restaurants are becoming a luxury which people cannot afford.

“I’ve tried my best with it but I need to cut my losses now and concentrate on building my future.”

Darren has turned the Facebook page for the business into a page for people to follow his charity endeavours: Everyday Heroes.

Donations in support of the Land’s End to John O’Groats Challenge can be made via bank transfer to: