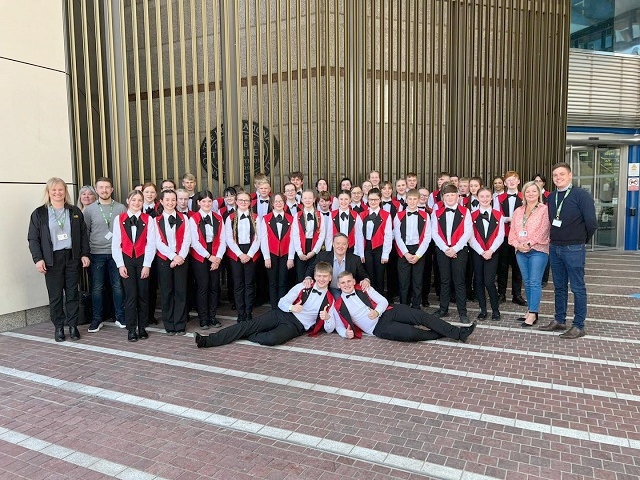 Wardle were against 5 other bands from England, Wales, Scotland, Lithuania and Norway

The Wardle Academy Youth Band has once again been named the champion of the European Youth Brass Band Championships for the third year running.

On Saturday 30 April, Wardle Academy Youth Band travelled down to Birmingham to compete in the European Youth Brass Band Championships. Normally, they would be travelling overseas to compete in this contest, however this year it was England’s turn to host the event.

The band, Mr Rigg and the music department have worked extremely hard to get their programme containing four pieces, including the set test piece and a fantastic trombone solo by Adam Warburton to an impeccable standard.

On the day, Wardle were against five other bands from England, Wales, Scotland, Lithuania and Norway. Wardle were first to play and gave it their all and were happy knowing they played their absolute best, with Adam’s solo receiving a standing ovation by the entire audience.

The results ended up being a close call between Wardle and the band from Norway, with only half a point between them but Wardle took the title once again for the third year in a row.

Musical director Lee Rigg said: "I am incredibly proud of all the students that took part in the recent European Youth Brass Band Championships in which the Wardle Academy Youth Band again became European Champions for the third time in succession, the first ever hat trick in this competition.

"The previous wins were in Montreux, Switzerland in 2019 and Utrecht, Holland in 2018. The band also won the championship in 2015 in Frieberg, Germany.

"This has been such a difficult time in which the pandemic really hit everybody so hard. It's been very tough but the students have worked tirelessly to keep up the high standards we have as an academy and have now reaped the benefits of all this very hard work."

The win means the band qualifies automatically to compete in next year’s contest which will be held in Sweden. But for now, the band needs to focus on Whit Friday and the Queen’s Jubilee in June.