You are Here: Home » News » News Headlines » Councillor Ali Ahmed is the new Mayor of Rochdale

Councillor Ali Ahmed is the new Mayor of Rochdale 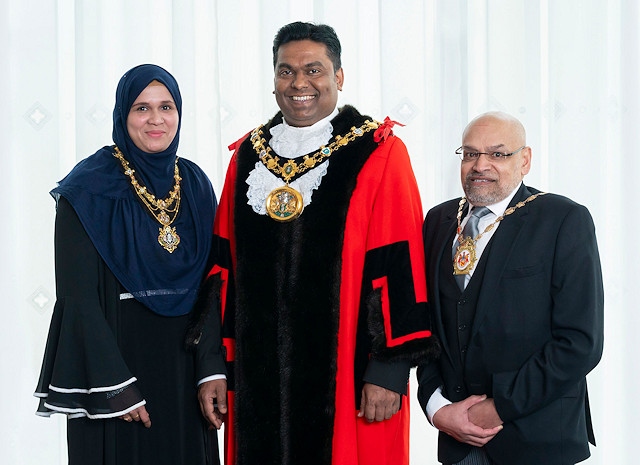 The new mayor and mayoress with consort Sultan Ali

The borough of Rochdale welcomed its new mayor yesterday (18 May), as Councillor Ali Ahmed was sworn in to office during a ceremony in Rochdale.

The appointment was made following the first full meeting of the council since the local elections earlier this month.

The evening was attended by former mayors, deputy lieutenants as well as other distinguished guests and community leaders as the departing mayor Councillor Aasim Rashid and Mayoress Rifit Rashid, handed over their chains of office.

The event was staged at Number One Riverside while the town hall remains closed for a major refurbishment.

The evening began with a rousing fanfare played by Rochdale Music Service. Council leader Neil Emmott said he is pleased Councillor Ali will have the honour of being mayor during the Queen’s jubilee year: “Ali is also our first Rochdale born mayor of Bangladeshi heritage so that is a significant milestone. I congratulate him on the appointment and I know how committed to the local community he is.”

Councillor Iftikhar Ahmed paid tribute to the new mayor and described some of his qualities: “Caring and kind to all, Ali Ahmed will make an excellent mayor for everyone in the borough.”

After receiving his chain, the new mayor said words of thanks. Born and brought up in Rochdale, Councillor Ahmed wants to see the borough continue to grow and thrive: “I am so proud to take up this role, it is an emotional evening for me. Now, as we hope we’re seeing the back of Covid I look forward as the mayor of the borough with my wife as my mayoress and our consort to do all we can to help promote our borough as we look to the future. We will do all we can to raise as much money for my chosen charities as possible and can’t wait to get started. It’s going to be a busy and exciting year.” 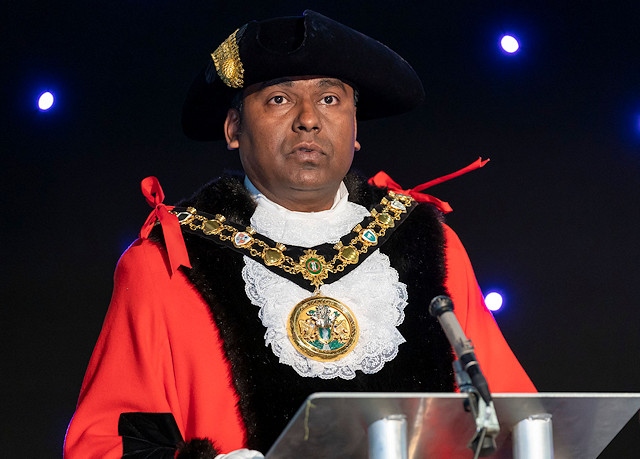 A past mayor's medallion was then presented to councillor Rashid.

Mayoress Syeda Farjana Begum, Councillor Ahmed's wife and mother to their five children who are all in full time education said she was looking forward to the year ahead.

Their consort will be Sultan Ali. First elected as a councillor in 1996 he was mayor of Rochdale in 2003-2004. He has served on and chaired several council committees and is a former member of the cabinet committee.

Councillor Janet Emsley and Councillor Shahid Mohammed thanked Councillor Rashid for his hard work, fundraising, dedication and energy over the past year as mayor.

The retiring mayor, Councillor Aasim Rashid said: “I have been humbled to be mayor for such a wonderful borough and am proud of our diverse community. Although starting our mayoral year was challenging due to Covid restrictions we managed to perform our duties with integrity and according to the guidelines. We had a tremendous time and gained a lot of knowledge about the rich history of the borough - the contribution of those pioneers who made Rochdale, Heywood, Middleton and Littleborough proud, not only across the United Kingdom but the world. We are thankful to our charity committee and those sponsors who helped us raise money for good causes. I am also grateful to all my family and friends who supported us massively to make our mayoral year successful. We have enjoyed every minute of this experience. Finally I thank my dear friend Ali Ahmed and wish him all the very best.”

The mayor’s Imam and Chaplain read a blessing for the new Mayor and the people of the borough.

The new deputy mayor will be Councillor Mike Holly, and deputy mayoress Mrs Margaret Holly. They were presented with their chains during the ceremony.

Food and refreshments were provided by The Lancashire Hospitality Co-operation with the menu designed by students from Wardle Academy.

The Mayor’s Charity Appeal for 2022/23 will be raising funds for Springhill Hospice, Jolly Josh, Parkinsons UK, Get Together After Serving, Rochdale Connections Trust and other local charities.