Rochdale artists head to London to perform for Jubilee celebrations 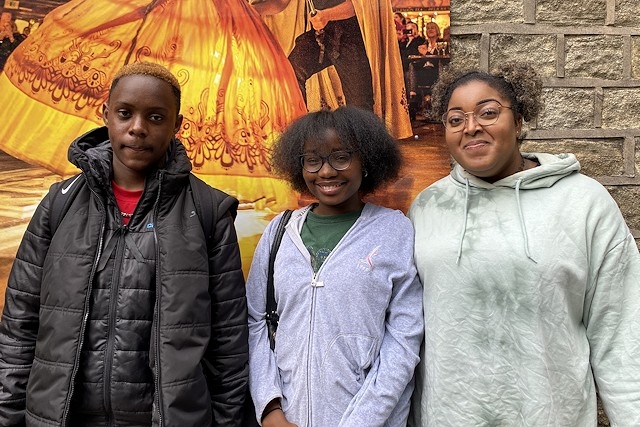 Three talented young dancers and drummers - and a school brass band - from Rochdale have been selected to join the biggest street celebration in decades, which also features stars from Ed Sheeran to Sir Cliff Richard and Basil Brush.

Vucky Nthobatsang, Simone Rhoden and Randy Anjeh are amongst 200 young people from Greater Manchester who are currently rehearsing for the Queen's Platinum Jubilee Pageant, a spectacular parade which is taking place in London on Sunday 5 June.

They will be joined by the 43 members of the Wardle Academy Youth Band, who are aged from 11 to 17. The band was established in the 1970s by the school's then head teacher Mr Anderson and are five times European youth champions.

The performers were chosen to take part in the parade by Greater Manchester carnival arts organisation Global Grooves, the only northern group to produce a section of the Royal celebrations.

Randy, 18, who was born in Italy, not far from Venice, moved to Middleton four years ago and attended St Cuthbert's RC High School. Now studying at Rochdale Sixth Form College, Randy, who is of Cameroonian heritage, is an experienced dancer, having taken part in many Italian carnivals. Whilst fellow dancer Simone, 30, who lives in Whitworth and is a performing arts teacher at a Bury high school, is also a seasoned performer.

But for drummer Vucky Nthobatsang, 16, who arrived in Rochdale from Botswana in 2020, the pageant will be his first opportunity to showcase his talents. A year 11 student at Kingsway Park High School, he was nominated by his teacher Stuart Bullock, curriculum leader for music. Although Vucky only started playing drums in 2021, Stuart says he has 'innate talent and drive' and is 'a young man who deserves opportunities'.

After an intensive rehearsal period at The Vale arts centre in Tameside and at Wardle Academy, the performers will travel to the capital to represent Rochdale in front of members of the Royal Family. The day's events will be viewed by a global TV and online audience of hundreds of millions.

Simone said: "The north has been a hub for the arts since the beginning of time but it is extremely underrated. It is about time that a group of epic northerners pop down to London and show them what we are all about!

"Growing up in Greater Manchester, which I moved to from Birmingham as a 13-year-old, I was introduced to many of the amazing art forms across the county. I know first hand the impact the local arts scene has had on myself, my career and my community. I am looking forward to representing Rochdale and Greater Manchester and all its fabulousness and being a part of a community that has a love for all things carnival."

Vucky said: "I've been making beats on tables since I was a kid and when I started at Kingsway Park, I thought why not take up the drums properly?

"This is such a great opportunity for me and it feels really good to be playing in London with so many other people."

Randy said: "I am looking forward to showing off my skills and meeting other performers with the same passion as I have. I have never danced in front of this many people before and want to test myself and entertain everyone who is watching.

"I also really love dressing up and can't wait to try on my carnival costume."

Bradley McColloch, head of music at Wardle Academy, said: "We are honoured to be playing such a prestigious event in front of millions of people. The students and staff are so excited to be heading down to London to attend a once in a lifetime experience and to be a part of a huge community of performers taking part in the day."

Freya Bennett-Nielsen, producer, Global Grooves, said: "Our carnival parade celebrates Greater Manchester in all of its wonderful diversity and shines a light on the cultural exchanges that take place when people collaborate with others who have vastly different experiences, ideas and ways of living.

“We are proud to be taking some of Rochdale's finest young performers down to London and absolutely know they will do us proud in front of the eyes of the world."

Global Grooves' colourful carnival influenced spectacle, called A Sharing of Gifts, draws inspiration from across the Commonwealth, including the Caribbean, Africa and the Indian subcontinent. It will also feature readily recognisable music, fashion and dance influences from closer to home.

At the head of the promenading entourage will be a glorious carnival queen in her own chariot, played by drag artist Cheddar Gorgeous. Following behind will be four giant walkabout puppets, a 100-strong young people's carnival music group, 50 lavishly costumed dancers and a sea of giant flag bearers.

The parade will wind its way through the streets of Westminster and along the Mall, past Buckingham Palace, using carnival, dance, music, circus and street theatre to tell the story of HRH's record 70-year-long reign.