You are Here: Home » News » News Headlines » Dan Killeen raises £1,400 for Cancer Research UK with 10k a day for a month

Dan Killeen raises £1,400 for Cancer Research UK with 10k a day for a month 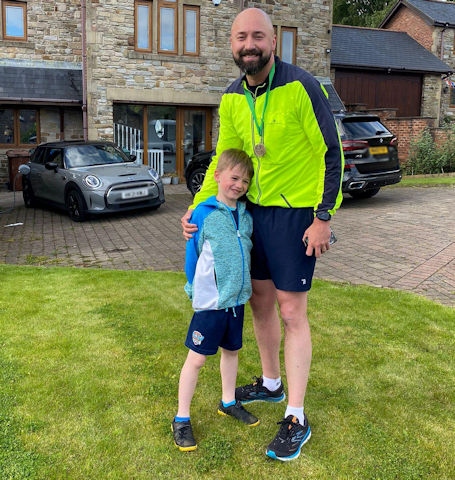 The former chairman of the Rochdale Musical Theatre Company has raised over £1,400 for Cancer Research UK by running 10k every day throughout May.

He said this started as a distraction after his father was diagnosed with lung cancer in March before undergoing surgery in May.

Dan said: “I needed to keep my mind on something else. I thought I could run 5k a day, but that’s not really a challenge. I’ve run marathons before so I decided to do 10k a day. Six days in, I realised how hard it was even though I increased my fitness and my weight came down.

“In some ways it has been pretty brutal. The constant pain in the legs for the last few weeks and trying to find the enthusiasm to get out and run late at night has been challenging to say the least. But there have been parts of it that I have really enjoyed. In what has been a challenging month for a number of the reasons, the physical and mental health benefits have been noticeable.

“I’ve raised more through this challenge than my last marathon. A lot of people knew dad was diagnosed with cancer, and my father-in-law has prostate cancer too. It feels like we have all experienced loss due to cancer, but also we have also been inspired by some incredible bravery from those in treatment or recovery. And that’s what I tried to think about as I ran around locally, in Blackpool and even around Old Trafford.

“A massive thank you to everyone who has sponsored me so far. Raising over £1,400 is just incredible; everyone’s generosity is truly appreciated.”

Of his decision to step down as chairman of the Rochdale Musical Theatre Company, the father-of-two said he would be focusing on other commitments, even though he will remain a theatre fan and live out his "theatre fix" through his young children.

He said: "I wish the group every bit of luck for the future. It was also starting to go in a different direction. It is a shame because I massively enjoyed it, but it becomes another job. I had a day with my six-year-old son afterwards, and I knew I'd made the right choice then.

"I am massively proud of what we've achieved in previous years and I would like to thank everybody who has been involved from the beginning, because it is a massive team effort from the roles on stage to behind the scenes. I hope everybody feels the same level of appreciation as the leading cast you have all been phenomenal to work with."

Dan is hoping to reach £1,500 in donations, which can still be made via JustGiving.