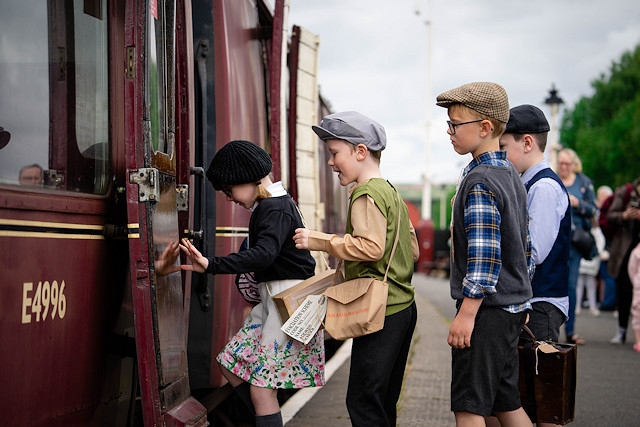 The ever-popular and nostalgic Heywood 1940s Day returned to town with a bang on Saturday (11 June).

The vintage wartime event - which has been running for over 10 years - is one of the largest events in Heywood’s calendar.

In a celebration of yesteryear, the streets were lined for the town’s official Armed Forces Day Parade, leaving the former Heywood Pub at 1300 hours prompt. Leading with the official standards, veterans and cadets alike marched along with the band around the town and returning to the pub.

Budding soldiers had the chance to take part in a war bootcamp at Blue Rose Gifts, which also worked on deciphering an enemy code… Those with sharp eyes will have spotted the Hurricane fly past at 2.03pm.

At St Luke’s, the NAAFI Café was open and the concert kicked off with Marina Mae, followed by talent from the town, including from Britain’s Got Talent runners-up, Sign Along With Us.

Evacuees were waved off from the East Lancashire Railway Heywood Station by parents, before returning by bus. A special jubilee tea party took place on Mission Street with sandwiches, cake and jelly for ticketholders.

A short Service of Remembrance took place in the Memorial Gardens at 11am, whilst the Home Guard kept a watchful eye on an unexploded bomb outside Mike Goldrick Blinds & Curtains.

Air raid re-enactments and blackouts took place in Tilly's Tea Room as Winston Churchill’s speech came over the wireless. Flags were joyously waved as the end of the war was marked with ‘It’s a Long Way to Tipperary’.

An encampment of World War Two military displays featuring classic vehicles, vintage aeroplanes, jeeps, tanks and armoured vehicles and steam engines was held at Hill Street, whilst Market Street shops dressed to impress, a vintage bus drove around the town and a military vehicle convoy passed by at 4.30pm.

Further entertainment was provided throughout the day at the Queen Anne, The Dressers Arms, the Heywood Market, Morrison’s gap, Heywood Civic Centre and the Trinity Methodist Church.