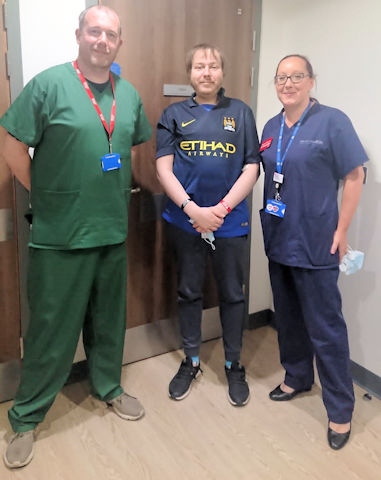 An avid Manchester United fan who has raised more than £30,000 for the cancer charity which supported him is taking on his biggest challenge yet – wearing a Manchester City shirt for a whole week.

Hamish Graham, 26, of Littleborough, has raised the staggering sum for Teenage Cancer Trust since launching ‘Hamish’s Challenge’ in September 2020. He has inspired friends and family to face their own fears and fundraise in his name by running, baking, cold-water swimming, bungee jumping and Lego building.

Now Hamish is taking on his toughest test yet, after attending a Blues in Business networking lunch as guest of honour last Friday. A member of the networking group for supporters of Manchester City FC challenged Hamish to wear a City shirt all week, promising to donate £100 to Teenage Cancer Trust if he agreed to the challenge.

Hamish accepted, and is now calling on others to support him in his efforts.

Hamish Graham was 24 when he was diagnosed with Acute Lymphoblastic Leukaemia (ALL) in May 2020 and was helped by Teenage Cancer Trust at The Christie NHS Foundation Trust. He was previously treated for a rare medulloblastoma brain tumour after being diagnosed aged seven. Hamish continues to receive ongoing support from Teenage Cancer Trust.

Sarah Graham, Hamish’s mum, said: “Any football fans out there will realise what a huge ask wearing a rival’s shirt is, so please support Hamish and donate what you can to help him through this week. Hamish will be wearing his late Grandpa’s shirt this week. My dad was a lifelong blue and season ticket holder and know he is watching Hamish with as much pride as I am.”

“To be diagnosed with cancer twice, the second time during Covid, and to go into isolation at The Christie, to smile every day, to think about other people and not himself, he is truly unique.”

Every day, seven young people in the UK aged 13-24 hear the devastating words “you have cancer” and their lives are turned upside down. Teenage Cancer Trust is the UK’s only charity providing young people living with cancer the specialised nursing and emotional support they need.

Hamish said :“Because of the care I’ve received from Teenage Cancer Trust, I wanted to do some fundraising too. I had to find something that was challenging but achievable whilst dealing with my chemo and something that could be done safely in the midst of a pandemic whilst shielding at home. I decided first to build Old Trafford out of nearly 4,000 pieces of Lego and then did a Lego Hogwarts. I have also done a marathon – a Marvel marathon which involved me watching all 23 Marvel films.”

Emma Cross, Relationship Manager for the North West and Yorkshire at Teenage Cancer Trust, said: “We are incredibly proud of Hamish and all those that have given their time and support to Hamish’s Challenge.

“We’ve been so impressed with the variety of challenges that Hamish’s supporters have taken on, from a bungee jump off the 220-metre high Verzasca Dam in Switzerland, to marathons, sponsored lunges, freezing cold water dips, Lego building, cooking challenges, and so much more. Knowing how much Hamish loves Manchester United, his latest challenge really will push Hamish beyond his comfort zone, but we know he will succeed.

“This support means so much to everyone here at the charity, and the money raised will be truly life-changing for so many young people with cancer. We can’t thank them enough.”

To read more about Hamish’s Challenge go to www.facebook.com/HamishsChallenge