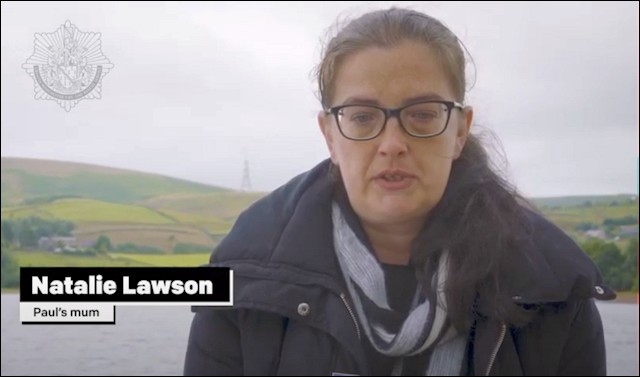 A screenshot from the video with Natalie Lawson

Natalie Lawson, the mother of Paul Lawson, who drowned at Greenbooth Reservoir, Norden, is once again supporting the Greater Manchester Fire and Rescue Service water safety campaign to remind people of the dangers of swimming and jumping in open water.

16-year-old Paul sadly drowned in June 2017 after he went swimming with his friends in Greenbooth Reservoir in Norden. It was a hot day and the teenagers thought it would be a good idea to go into the water to cool off.

Paul was a first-year BTEC Sport student at Hopwood Hall college and keen footballer. Having previously played for Wardle FC, Paul was a member of the Hopwood Hall Football Academy team at Middleton Campus when he died.

One of four families affected by such heartache who joined the campaign, Natalie first spoke to the fire service in 2020 about the importance of being aware of how dangerous open water can be – reaching out far and wide to save others from ever having to experience the same.

This summer will see those who backed the hard-hitting campaigns of the previous two years return to social media, where their personal stories of losing loved ones will be shared in a bid to prevent people from swimming and jumping into open water.

Natalie Lawson has bravely shared her story with GMFRS again this year to help raise awareness of just how dangerous open water, such as reservoirs, can be.

Read more: “I’d lost my boy and there was nothing I could do about it” – Paul Lawson’s mum speaks of her loss for new water safety campaignPublished: 28 July 2020

The 2022 campaign comes as figures released show that 165 people in England accidentally drowned in 2021.

In the last five years, GMFRS has been called to 41 fatal water incidents. Sadly, a number of those were young people who got into difficulty after jumping into or swimming in open water across Greater Manchester. These incidents tend to occur over summer during periods of warmer weather.

This summer GMFRS will once again partner with families and friends of those who have lost loved ones in accidental drownings, to share their stories so that no other families experience their heartache.

The campaign launches for the Royal Life Saving Society’s Drowning Prevention Week, which takes place from 18 June to 25 June.

“Our Water Safety campaign helps to educate young people on the dangers of open water. Cold Water Shock can kill even strong swimmers, and people can become caught up in undergrowth and drown.

“As it gets warmer over summer, our message is to never be tempted to jump into or swim in any open water to cool off.”

This year’s campaign will be supported by social media activity throughout summer, as well as digital and printed displays across Greater Manchester in areas that are popular with young people over summer, sharing the campaign messages to help people become aware of staying safe around water.

On social media, videos will be shared by family and friends, speaking of the dangers of entering open water.

Deputy Mayor for Policing, Crime and Fire, Bev Hughes, said: “It’s important that we continue to raise awareness of the dangers of open water to prevent accidental drownings, so I am pleased we are launching the GMFRS water safety campaign for this year once again.

“I want to thank those who have lost loved ones for continuing to share their stories, as you are helping to prevent other families from experiencing the same heartache.”

You can also visit the GMFRS website for more information on water safety and the campaign.