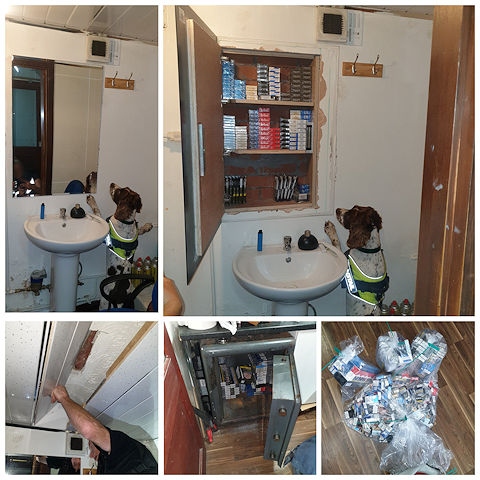 Billy sniffing out tobacco products, hidden behind a bathroom mirror

A huge stash of illegal tobacco has been seized by police after being discovered by a police dog.

Trained detection dog Billy sniffed out the items during a crackdown on illicit tobacco products in Rochdale town centre on Friday 24 June.

“Thanks to Billy the trained detection dog, the team discovered a number of elaborate secret compartments leading to the seizure of a large haul of tobacco.

Illegal tobacco is known to be a major cause of young people starting smoking and undermines adults’ attempts to quit, as it is often sold at very low prices.

Research carried out by Trading Standards North West found that nearly a quarter of young smokers in Greater Manchester bought cigarettes they knew were illegal. 6 in 10 purchases by under 18s of illegal tobacco were made at local shops.

Illegal tobacco is smuggled and distributed by organised criminals, which means buying it also funds crime.

With the UK’s estimated 5.5 million smokers paying an average of around £14 for a packet of 20 cigarettes, the sale of cheap, illegal tobacco by rogue traders in shops, private homes and through social media has resulted in a loss of £2.3 billion in taxable income in 2019/20 as it's imported illegally without duty being paid, income which would otherwise fund vital public services.

Do you know where illegal tobacco is being sold? Report it anonymously by calling Crimestoppers on 0800 555 111 or contact the council’s trading standards team by emailing trading.standards@rochdale.co.uk