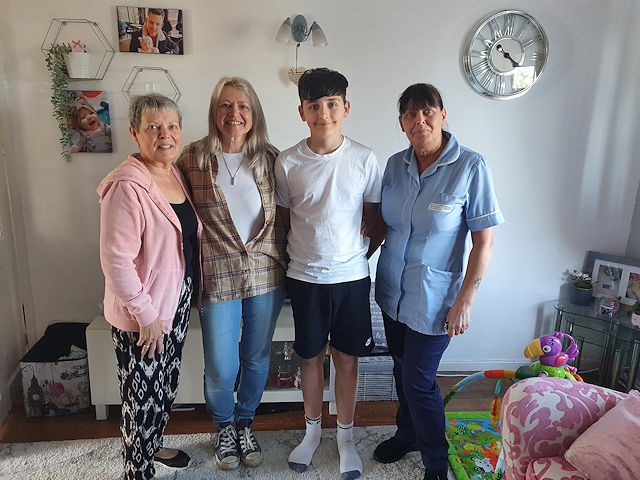 Jonah was quick on the scene

A Year Six pupil at Healey Primary School has been praised for his quick thinking in helping an elderly man who fell off a ladder.

Jonah Brooke-Meadows, 11, had finished school on Friday 13 May when he was passing 88-year-old Bill Keen’s house in Syke when he sprang to the man’s aid.

Bill had been trying to put a bracket on the wall outside his home, when he slipped backwards from the ladder. His partner tried to grab him, but quick-thinking Jonah jumped the railings and phoned an ambulance.

Mandy, Bill’s daughter, told Rochdale Online how Jonah went inside the house and got some blankets to put around her dad and kept him talking, as he’d been told they could be waiting up to three hours for an ambulance.

She said: “He saw my dad on the floor covered in blood and jumped over the tall railings to assist. He phoned the ambulance and got blankets to keep him warm and was very calm.”

Bill had badly injured his hands in the accident – Mandy described them as “being torn to shreds” – later undergoing plastic surgery for the injuries, which included a broken finger.

“Dad’s hands were ripped to shreds. There was blood, skin missing, a bone sticking out… This didn’t phase Jonah at all,” Mandy continued.

As a thank you, Mandy and her family bought Jonah some chocolate and Xbox vouchers – whilst the brave boy was also recognised in school with a special assembly.

Mandy added: “Jonah deserves recognition. He’s an amazing young man. The week afterwards he called on dad to see how he was, and children don’t do that. It just shows he was thinking of him.”

Sarah, Jonah’s mum, said: “Myself and all Jonah’s family are incredibly proud of him for being so brave and selfless in helping Bill in what was a scary situation for anyone. And at just 11-years-old, he took it all in his stride.