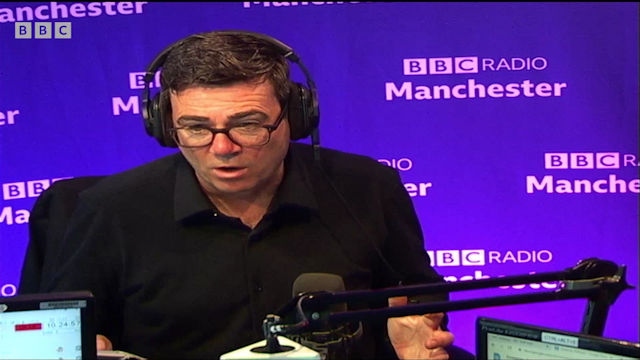 Andy Burnham admitted he was not forced by the government to introduce Clean Air Zone charges during a heated exchange with a caller on the radio.

The Greater Manchester mayor claimed the government ‘effectively’ forced the city-region to charge drivers of the most polluting commercial vehicles.

The Clean Air Zone, which was set to come into force last month, is currently under review with local leaders now calling for all charges to be scrapped.

It comes after a public backlash led to the government delaying the deadline by which councils must bring pollution levels below legal limits by two years.

A new proposal, which would offer owners of buses, lorries and taxis funding to upgrade their vehicles, is set to be submitted to the government tomorrow (1 July).

Speaking on BBC Radio Manchester this morning (30 June), Mr Burnham was asked why he didn’t suggest such a scheme with no charges in the first place.

He claimed that local authorities had ‘no choice’ but to introduce charges under the legal direction which required air quality to be improved by 2024.

However, he conceded that the government did not explicitly call for charges.

He said: “My argument is that local authorities were manoeuvred into a position where they had no choice.

“Our 10 [local authorities] were given a legal direction to clean up the air by 2024 and, like Birmingham, like Bradford, like Portsmouth, they looked at the evidence and the only way they could do it that quickly was by using charges.

“So you are technically right to say the government didn’t explicitly say you’ve got to do it via charges, but they effectively did because of the deadline that they imposed on people.

“I am conceding to you, the way you put your question is technically right, but I think it’s duplicitous of central government to leave local authorities taking all of the blame.”

Greater Manchester is due to submit a revised scheme which must achieve air quality compliance no later than the new deadline of 2026 tomorrow (1 July).

Unlike the previous plan which would have seen the most polluting vans, lorries, buses and taxis charged a daily penalty for using the city-region’s roads, the new proposal would not involve charging any vehicles at all.

Instead, buses, lorries and taxis which do not comply with emission standards would be offered cash for vehicle upgrades using government-funded grants.

However, in a letter to local leaders earlier this month, environment secretary George Eustice suggested still charging, but in Manchester city centre only.

Mr Burnham was also asked by the caller, Chris, why the 1,200 people who prematurely die due to air pollution in Greater Manchester no longer matter.

He said: “It’s not the case that all of those premature deaths don’t matter.

“We’re still committed to cleaning up the air, but what we’re saying is the world has changed because of the pandemic.”

The government delayed the deadline by which air quality compliance must be achieved to 2026 after evidence emerged of sharp rises in prices of new vans.

Mr Burnham argued that if cleaner vehicles were not available or affordable, motorists would have to pay a tax and the air would not become any cleaner.

Greater Manchester was given until 1 July to come up with a revised scheme.

The Air Quality Administration Committee will be asked to agree to submit the new scheme to the government tomorrow and notify the Secretary of State accordingly, subject to any comments from the 10 councils in the city-region.

The committee will also be asked to agree that the next stage of the new plan is developed through ‘intensive engagement’ with business and the public.

A Defra spokesperson said: “Following his initial proposal to bring forward the largest charging Clean Air Zone in the country, we are pleased to hear that the Mayor has come up with a plan – and we look forward to seeing evidence that will back it up and show how it will deliver the clean air that the people of Manchester deserve.”