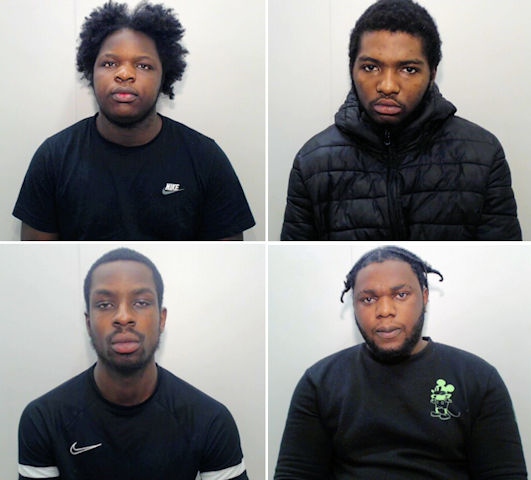 A gang of 10 men have been jailed for 131 years following an investigation by Rochdale police.

Preston Crown Court was told that the 10 defendants – all of Manchester – were all members of a gang called the ‘M40’ or ‘40’, named after the postcode of the area in which the gang originated. The gang also called themselves ‘2x2’, ‘4s’, ‘Lane Boys’ or ‘Laners’.

The conflict came to a head on Bonfire Night 2020 when, in one of three acts of violence, ‘M40’ gang member Alexander John Soyoye was cornered in his gang’s ‘territory’ before being stabbed and beaten to death.

Within days, if not hours, of the murder of Soyoye, the defendants were plotting to avenge his death by violently targeting one or more of the rival gang members whom they believed to be responsible.

Four of the men identified the targets and sought out information about their movements and whereabouts, whilst the other six acquired weapons and went out to locate and attack.

The plot was foiled when Harry Oni was arrested for violent disorder in connection with the incidents on the evening of Soyeye’s death.

During analysis of his mobile phone, officers broke the encryption of a messaging service, revealing messages between the defendants regarding attacks which had been carried out and others in planning.

The court was shown CCTV footage of M40 gang members carrying out a number of attacks on individuals.

After being found guilty, at an earlier hearing, of conspiracy to murder, Harry Oni, 19, Jeffery Ojo, 21, and Gideon Kalumda, 21, were all sentenced to 21 years’ imprisonment and Brooklyn Jitobah, 18, was sentenced to 20 years.

Detective Superintendent Nat Dalby, of GMP’s Rochdale district, said: “Today is the culmination of a lengthy investigation by Rochdale’s Serious and Organised Crime Team. After utilising the skills of specialist colleagues to break the encryption of a messaging service, the investigation team found hundreds of thousands of communications proving that these ten men had entered in to an agreement to kill or seriously injure a number of individuals.

“Their plans, some of which had been executed and others which remained in planning, posed a serious threat of harm to their targets as well as a very real risk to members of the public.

“This case shines a light on the type of work which is ongoing, often behind the scenes, to prevent and reduce violent crime across Greater Manchester – ultimately keeping our communities safe.

“This positive outcome should reassure members of the public and warn offenders that those involved in both the planning and execution of acts of violence will be prosecuted and brought to face justice, where they should expect to feel the full force of the system.”