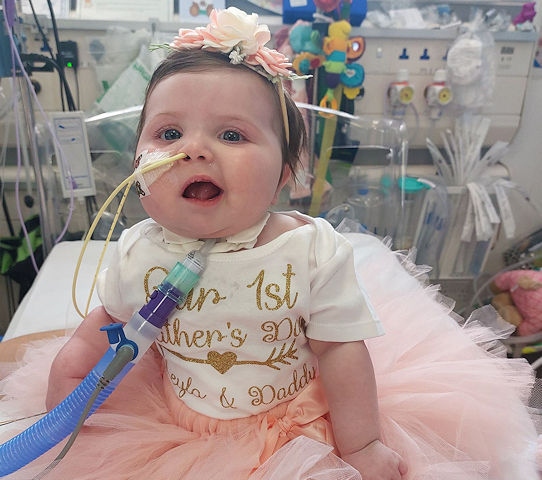 The family of a 10-month-old baby girl from Heywood – who is desperately awaiting a heart transplant – have joined an appeal for donors.

Leyla Bell was diagnosed with a heart condition when she was just four weeks old and has spent most of her young life in hospital since she was born on 2 September 2021.

For the last 200+ days, she has called Newcastle’s Freeman Hospital her home, where she is on the urgent waiting list for a donor heart.  The hospital is one of only two specialist centres in the UK that carry out heart and lung transplants for children.

There are hundreds of children in the UK waiting for an organ transplant with around 48 needing a heart – a figure that has remained relatively stable over recent years.

Many of the children currently waiting for a heart transplant are relying on a young donor to save their life and statistics from NHSBT show that parents that are asked about organ donation are less likely to donate a child’s organs with only 55% of families supporting organ donation for a relative under-18 in 2020/21.

Children on the urgent list for a heart transplant wait, on average, two and a half times longer than adults – around 88 days rather than 35 days.

Leyla’s family have joined the parents of several other children awaiting a heart transplant in appealing for donors to come forward.

Born by emergency caesarean, 15 days past her due date, mum Savana’s health visitor said Leyla was “the most alert baby she had seen in years.”

Savana – who has been registered as a potential organ donor since she was 16 – said: “She appeared fine but as the midwife was dressing her, they noticed some irregular breathing. She was taken to NICU, given four hours of oxygen, fed via a NG tube for 48 hours and given five days of intravenous antibiotics.

“She also had a lumbar puncture, full sepsis screen and chest x-ray, all these were clear. We were both discharged after five days and went home.

On 1 October, Savana noticed a rash on Leyla’s chest and rang the GP for an appointment. When waiting for the GP to ring back, Leyla lost her voice and began to sound wheezy.

The GP saw Leyla straight away, sending them to Oldham Royal Hospital due to her increased wheezing.

“Leyla was checked over and we were sent home, saying she had an upper respiratory tract infection. I thought, ‘okay, this is easily solved with the drops we’ve been given’,” Savana explained. 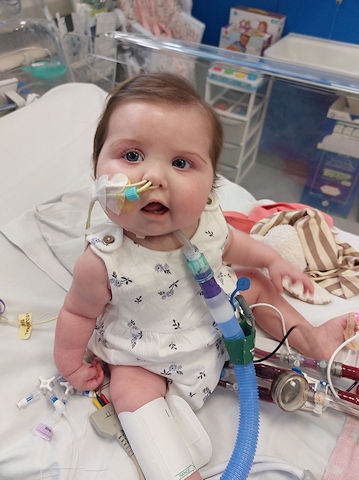 On 4 October, Leyla had a bottle in the morning and nothing else – which Savana says was unlike her – so the concerned mum rang NHS 111. A first responder was dispatched, but Leyla quickly began to look worse before they arrived, so Savana rang 999, requesting North Manchester Hospital where Leyla had been born.

Doctors thought Leyla had bronchiolitis, but a chest x-ray showed an enlarged heart and liver. Acting quickly, the consultant got in touch with the North West and North Wales Paediatric Transfer Service to move her to Royal Manchester Children’s Hospital as Leyla needed a higher level of care.

Leyla needed to be placed on a ventilator due to her irregular breathing, but as intubation was attempted, her heart stopped, resulting in CPR and adrenaline being administered.

Thankfully, the family made it to Royal Manchester where Leyla underwent an echocardiogram, and she was diagnosed with dilated cardiomyopathy -  the muscle walls of the heart become stretched and thin. The thinner walls are weakened, this means the heart can’t contract properly to pump blood to the rest of the body.

With a crucial next 24 hours, staff worked to stabilise Leyla’s condition.

24 hours passed with Leyla having many samples of blood, urine and saliva taken to try and determine the cause of her heart condition. On day six, her parents were told there had been no improvement and their only hope was an unlicensed drug called levosimendan.

Savana continued: “Thankfully the hospital got the authorisation for two doses of the drug and on day 10 Leyla had her first dose. Due to the effects of this drug, we were able to remove Leyla's ventilation support, she was given a CPAP mask to aid her breathing and then they reduced that further to a high flow nasal mask. After 18 long days Leyla was removed from all breathing support, her consultant was happy with her progress and happy to move us to a ward.” 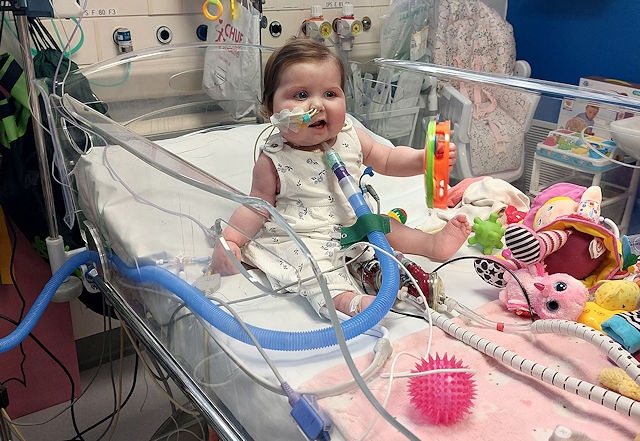 However, on the day Leyla was moved to a ward, the family received the results of the genetic tests: a rare gene that Leyla’s own body had created, causing two types of cardiomyopathy – dilated and non-compaction, where the muscular wall of the heart appears 'spongy', affecting both the heart's electrical ability and its ability to pump blood.

The gene is so rare that only two other people in the world have been diagnosed with it.

“This didn't change our treatment plan just our prognosis. As unclear as Leyla's future was, we remained hopeful, with each IV line of medication that the doctors removed our baby became our baby again. Happy, smiley and active we moved to a ward, she began drinking from a bottle, wriggling down her cot, laughing at mummy and daddy, cuddles with her big brothers and wearing clothes. Life seemed to be getting back to normal and we were heading for the front door, home in time for Christmas.”

In November, Leyla deteriorated quickly, returning to PICU and again requiring a ventilator. With a bleak prognosis, her family began to fear the only option would be a heart transplant.

After meeting with the transplant co-ordinator, Leyla was listed urgently for a heart transplant and transferred to Newcastle’s Freeman Hospital. 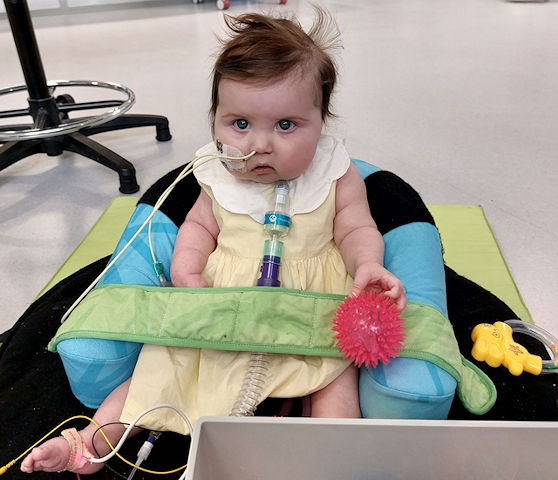 Just five days before Christmas, Leyla was given a Levatronix biventricular assist device - an implantable pump designed to help the heart function better when both ventricles are failing.

10 days later, she was transferred to a Berlin Heart BiVAD. Still struggling to tolerate naso-gastric feeding (NG), she had a nasojejunal tube fitted – bypassing her stomach altogether to provide nutrients to her small intestine. Leyla began gaining weight.

Savana and Martin tried to wean Leyla from ventilation, but because she became so tired with the CPAP, the decision was made to give her a tracheostomy so she could progress and have a more normal life in hospital.

“We have been told she will more than likely ned to be ventilated until post-transplant, due to her mitral valve leaking into her lungs and the four pipes in her chest from her Berlin heart,” Savana added.

In January, Martin caught covid, requiring the family to return home to isolate for 10 days. During this time period, Leyla had her first tracheostomy tube change – and she progressed well, allowing her ventilator settings to be reduced and tolerate NG feeds.

Unfortunately in March Leyla developed a chest infection which set her back and she needed more support from the ventilator again. Antibiotics cleared the infection, but she developed another around Easter.

Seemingly better from her infections, Leyla had a stroke, leaving her paralysed on her right side – and she was removed from the transplant list as doctors were worried if she would survive the operation. She was added back on nine days later after a speedy recovery.

The baby girl’s bad luck didn’t end there as she contracted sepsis in June 2022 after one of her Berlin heart sites became infected. She was again suspended from the list for three weeks. 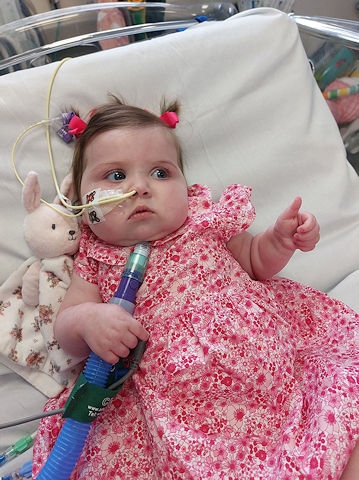 Savana said: “Leyla's mitral valve has deteriorated which is why she's unable to have her ventilator settings reduced, meaning we are, and have been, unable to go off the unit for a number of weeks.

“The team have discussed what steps to take to make Leyla's quality of life better pre transplant and also keep her as well as they can to be able to be on the transplant list.

“We've had five really good days since the changes were made but we are so scared that another infection is just around the corner. She desperately needs a new heart.

Savana is all too aware that in order for her daughter to get a heart, another child needs to die.

“I wish there was another way but there isn’t, and I can understand why some people say no as they are being asked to donate an organ at the worst time in their lives; when they’ve been told they will never see their child awake again,” she said.

“I’d just hope they’d take solace in the fact that their child lives on in someone else. All we are asking is for people to have that conversation. If you asked 1,000 people, would they accept an organ if they needed it, they would because they want to live – and that’s all we want to do, I want to give my daughter that chance too.”

If you want to be an organ donor after you die, it’s really important that you talk to your loved ones and make sure they understand and support your organ donation decision.

You can also register your decision on the NHS Organ Donor Register. Find out more about organ donation here.