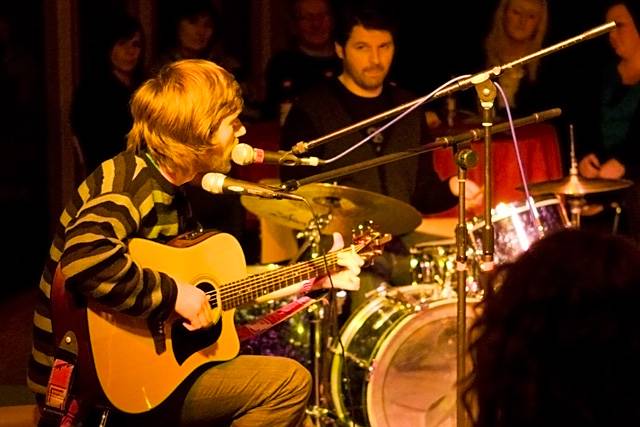 Touchstones Rochdale was graced with an unusual and breathtaking musical experience as The Local and CMN Tours came to town.

This is probably the hardest review I’ve ever had to write, not because I didn’t like what I saw/heard, but because I am still digesting the jaw-dropping obscurities of the music.

Three musicians, of unmistakable talent and ability, proved they could not only play but also captivate a room of stunned onlookers and send them away in an undecided daze, as if they had just awoke from a dream.

Unlike other reviews I have written, there is no set list, no designated musical instrument player, no structure - just peculiar sounds from their guitar, banjo, piano, and effects pedals playing back animated sounds of despair, anguish and laughter, as well as birds singing, children playing and recorded sounds I am too afraid to hazard a guess at.

David Thomas Broughton, Doveman (aka Thomas Bartlett) and Sam Amidon share a unique theatrical facet in their performances, as they not only look enquiringly at each other mid song to see what they are going to do next, but often leave the stage or go and sit with the audience, break into a bizarre dance routine or as David Thomas Broughton did, staged a crying episode as part of an emotional love song, which was recorded live and played back as a backing sound for the rest of the piece. It was stunning.

Many of the sounds were acoustic based with interweaving folk and experimental sounds and the presence of three unusually weird, yet superbly talented human beings.

Before the gig, I asked one of the 'musicians', who turned out to be the sound man, what kind of music to expect. I wanted to know what kind of sound, instruments, genre, influences, similarities…so I was a little taken back when a stern face replied: “Good. It is good music. If I described it any other way I would be doing an injustice”. At which stage, my genuine curiosity hardened into pretty low expectations. However, thankfully, these amazing musicians erased this little agitating diagnosis, they were not just “good”, they were talented, luring, and awesomely obscure.

A definite must-see - for the visual experience if not the stunning music itself.