You are Here: Home » News » News Headlines » From puppies to police dogs - a trainers diary (Week one)

From puppies to police dogs - a trainers diary (Week one) 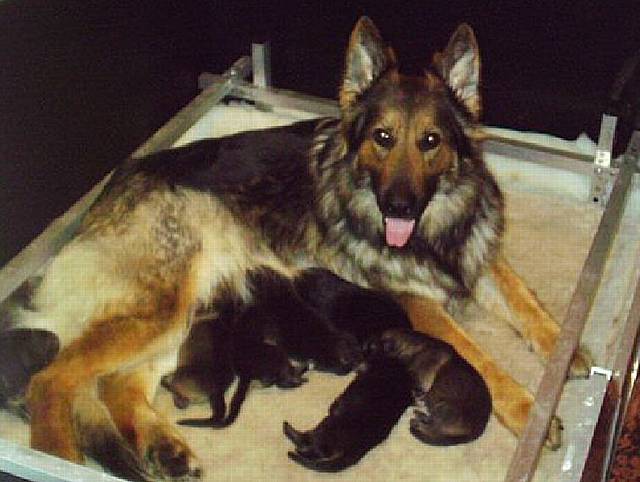 Happy family. Ruby and her puppies before the training process begins

Cath Phillips, from On Track Training School in Rochdale, has started a weekly diary to give an insight into her job as a dog trainer for both GMP and Merseyside Police.

She said: “Over the past eight years Greater Manchester Police have established a very successful breeding programme. My involvement as an outside trainer has been to work with the breeding manager, Paul Quinlan to develop and implement a puppy test and an early training programme”.

Ruby and the birth

“Ruby started to give birth last Wednesday afternoon and continued right through until Thursday afternoon. Many thanks to Adam our vet who advised us throughout! It seemed everyone was on tenterhooks as I text Steven her owner and Jan the Breeding Manager for Merseyside Police keeping them informed as each puppy was born.

"As the hours ticked by Ruby gave birth to eight puppies then disaster struck as the next two puppies were born dead.

"A scan had shown that there were 11 puppies so we waited in dread for the final puppy to arrive and prayed that Ruby would be okay. At last he came and to our delight he was fit and well.

"The contractions finished and Ruby got on with the job of feeding and cleaning these beautiful babies. It really is amazing how new mums know exactly what to do.

"We thought it would be plain sailing from now on but how wrong can you be.

"I started to notice that one of the male puppies was smaller than the rest and wasn’t moving as vigorously towards his mum.

"He felt cooler than the others and this was serious as puppies cannot control their body temperature and need the warmth from their mother.

"We wrapped him in a warm blanket and attempted to hand feed him as when he was placed on mum’s teat he didn’t latch on and suckle. Time ticked by and despite all our desperate attempts to save him he simply got weaker.

"The emergency vet had warned that he was probably small for a reason and there could be internal problems.

"I decided that if it was just warmth and food he needed we could save him but if it was more serious then we had little chance of saving a puppy so young.

"I thought being philosophical about the whole thing would make it easier to cope with what seemed inevitable but when he slipped away around 4.30am I felt an overpowering sense of loss and sadness.

"My partner, Peter was beside himself. He had sat for hour after hour nursing this tiny creature and to feel him pass away in his hands was a real crushing feeling of failure.

"They are nearly a week old now and what delight at watching them routing for mum or piling together for warmth.

"Their eyes and ears are still tightly shut but they are aware of many stimuli such as being picked up, being away from the warmth or falling off a teat. Each minor trauma enables the young brain to develop and cope with new experiences preparing it to deal with the unusual in real life.

End of Week One.

Check Rochdale Online next week to see how the puppies are doing.