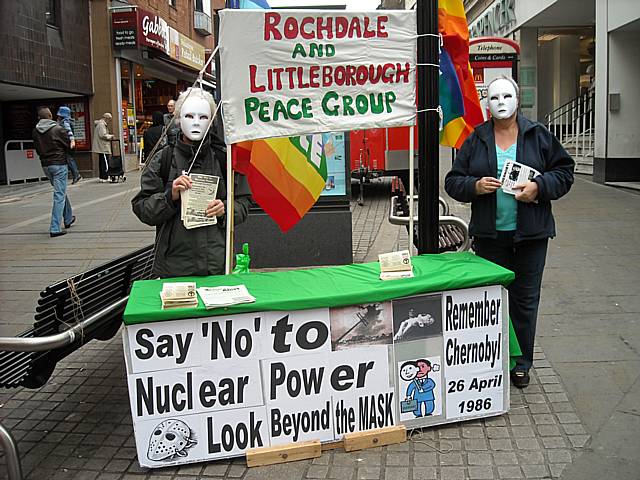 Rochdale and Littleborough Peace Group marked the 23rd anniversary of the nuclear disaster at Chernobyl by campaigning against nuclear power.

They wore theatrical masks while distributing leaflets to shoppers in Rochdale town centre, emphasising their view that nuclear power is dangerous and that no more nuclear power stations should be built in Britain.

Philip Gilligan from the Peace Group said: "The government plans to build more nuclear power stations, when the existing ones are already polluting our planet and deforming our children.

"In 2006, New Scientist reported that the cloud of radiation spewed out during the disaster at Chernobyl on 26 April 1986 could end up killing 60,000 people - 15 times as many as officially estimated. Windscale,

"Three Mile Island and Chernobyl are not the only nuclear accidents whose aftermath threatens our futures; nor are they the last.

"Meanwhile, German government scientists have discovered that leukaemia rates in children increase according to how near their homes are to nuclear facilities.

"We need to remember the lessons of the Chernobyl disaster and to halt these plans. More nuclear power stations will expose us to even more risks."

The Peace Group and the Chernobyl Children's Project are holding a joint fund-raising picnic on 21 June. Anyone who wants to buy tickets should contact Rae Street on 01706 378043.