You are Here: Home » News » News Headlines » Transport spend is not 'Plan B' says Council leader

Transport spend is not 'Plan B' says Council leader 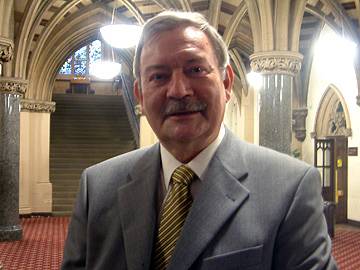 Leader of the Council, Lib Dem Councillor Alan Taylor, showed he is still embittered by the defeat of the congestion charge plan he and his party supported when he railed at opposition councillors for having the temerity to call the £15million to be spent in Rochdale on transport as “Plan B”.

Councillor Taylor went into a long diatribe covering all the ground the Yes campaign failed to convince the public with citing a the “missed opportunity” of a transport “revolution” with 40 years investment in five years. He said the £15 million to be spent now was not a plan B, it was, he said, doing the best with the money available.

He accused those opposed to the scheme of “conning” the public into voting no by persuading them that they would be paying £1200 a year; Councillor Taylor resorting to an argument he attempted during the campaign to persuade those who wouldn’t pay to impose the charge on those who would because it wouldn’t affect them, a plea called morally bankrupt by no campaigners.

Conservative leader, Councillor Ashley Dearnley, raised the concern that he said is shared by an increasing number of people, particularly retailers in town, that bringing the Metrolink to town could take more people out of town rather than bring them in.

Councillor Taylor disagreed and said the retailers he had spoken to welcomed the extension of Metrolink. He said: “The arrival of the Metrolink has brought increased investment and more business to every town it is in, and I am confident it will do so in Rochdale.”

Asked by Conservative Councillor Michael Holly if Oldham would benefit more than Rochdale, Councillor Taylor admitted it probably would “because it is closer to Manchester” but he insisted there would be significant benefits for Rochdale.

“It will take 45 minutes to get to the centre of Manchester at a time when increasing congestion will see more and more people stuck in traffic jams.”

His one regret, he said, was that getting the Metrolink into Middleton, which was an aspiration, was now a “pipedream”.