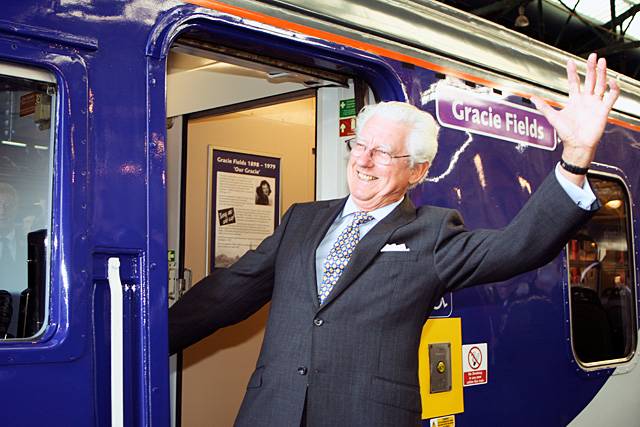 A train has been named ‘Gracie Fields’ to commemorate the closure of the Oldham loop line which takes trains from Rochdale to .

Today (Saturday 3 October) is the last day that trains will be running on the loop line before work begins for a new Metrolink line.

Northern Rail chose to commemorate the occasion by naming one of its Class 156 trains ‘Gracie Fields’, after the much-loved Rochdale-born singer and actress.

The nameplate was unveiled by Gracie’s Nephew Douggie Wakefield at Manchester Victoria Station in front of Mayor of Rochdale Councillor Keith Swift, Mayor of Oldham Councillor James McArdle and the Lord Mayor of the City of , Councillor Alison Firth.

Mr Wakefield said: “It’s not everyday that a man is asked to name a train, I am extremely proud to be unveiling this nameplate.

“It is lovely for Gracie to be remembered; of course I am the last one standing so it is also a great privilege for me.”

Mayor of Rochdale Councillor Keith Swift informed the gathering crowd about the history of Gracie Fields, he told how Gracie had never had a singing lesson in her life and that at age 14 she changed her surname from Stansfield to Fields because her mother told her she would never become a star with a name like Stansfield.

Councillor Swift told how today was a ‘proud day for Rochdale’, he said: “Today marks the end of an era but also a new beginning for .”

Rochdale MP Paul Rowen said: “To name the train after Gracie is a fantastic idea, it is a fitting end to the Oldham and loop line. I am already looking forward to the Metrolink in the next 18 months.”

Although today marks the start of a new chapter for Chairman of STORM (Support the Oldham Rochdale Manchester rail line) Richard Greenwood described today as a ‘very sad day.’

He said: “Of course today marks the end of an era, although I do think the change could have been handled better. Today could have been a celebration but instead it is sad because places like Milnrow and Shaw will be without trains.”

One of Mr Greenwood’s concerns now is that of overcrowding at other stations, he said: “With the closure of the line there are units not being used, but surely if people are getting on the train in other places such as the units should be lengthened.

“Assuming the Metrolink is on time it will provide a better service in the evenings and at the weekend.”

The Vice Chairman of STORM, Tony Young, said: “Today is a historic day and I look forward to the Metrolink, however there are still a lot of unknowns, for example the length of time it will actually take, the quality of the replacement buses and of course there is no proposal to do anything with the existing trains.”

STORM was set up over 30 years ago to fight for the survival of the line when there had been several attempts to close it completely.

Lee Wasnidge, the western area director for Northern Rail, said: "As Northern hands over its stewardship of this line, we thought it right to commemorate the long rail involvement in the Oldham Loop by naming a train, so that this long association can be carried across the Northern network.

"It is our practice to name trains after Great Northeners - people who have made a difference to the lives of people across the North, if not further afield. So together with our partners, GMPTE and STORM, we chose the name of Gracie Fields.

"We think this is an excellent choice - A Rochdale lass who through her talent for singing and humour brought enjoyment to millions in both peacetime and wartime. Her gift of free travel for servicemen and women on Rochdale's buses and trams during the war resonates with the reason why we are here today. And it is particularly appropriate with this week seeing the 30th anniversary of her death."

Following the ceremony ‘Gracie Fields’ (unit number 156466) departed from at 16.38pm through to Shaw and Crompton. ‘Gracie Fields’ will also operate the last scheduled passenger train on the Oldham Loop line at 23:28pm.

One passenger on the train had been on the earlier train but decided to get off and wait an extra half an hour to ride on the ‘Gracie Fields.’ Marian Scully from Royton said: “I got off the train I was on to ride this one because I thought to ride the Gracie Fields train was a chance in history.”

New Metrolink stops will be built at Kingsway, Newbold and outside railway station on the new line.

The first trams will be running as far as Central Park by spring 2011, then to Oldham Mumps by autumn 2011 and finally to by spring 2012. Services will run every six minutes from Shaw and Crompton and every 12 minutes from .

Alternative bus services will be provided while the railway line is closed.

Rail services will run as normal on the line between , Rochdale and .