You are Here: Home » News » News Headlines » High 'Voltage' at the Brickcroft

High 'Voltage' at the Brickcroft 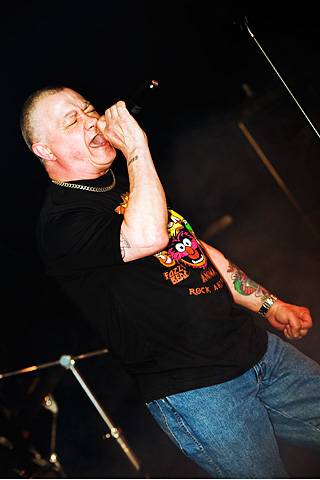 Playing together since the early 80s, Geoff Greenwood and Geoff Hollows joined forces with Alan Gill and Roger Kinder to re-launch Voltage as a gigging band for the second time in 20 years in the summer of 2009. Re- vamping old songs such as 'Burned Alive', 'Clock Strikes 12', 'Subway Walker' and 'Rock 4 Ever' they added a heavy mix of well known covers to their repertoire and are now playing to packed venues throughout the North West.

Last night the packed venue was the Brickcroft Social Club in Rochdale; their reputation had preceded them and their fan base had followed them, with around 300 packed into the club.

Their experience, versatility and the range of influences, from the blues sounds of Tom Petty and Gary Moore to the rock of KISS and Motley Crue along with the heavier sound of Metallica, had the fans rocking, head banging and, drenched in sweat, inching further and further forward towards the stage and the pulsing rhythm of Gill on Bass and Kinder on drums, revelling each time guitarist Hollows let loose with his superbly crafted licks and riffs. With Greenwood's rough and ready vocals rasping over the top of the sweet raucous sound from behind him, Voltage rolled back the years and showed they are masters of stage craft as they worked the crowd brilliantly.

Supporting Voltage was a young up and coming band from Rochdale, 'Publicity Stunt', two 16 year olds and two 17 year olds, Josh Marrow (guitar and vocals), David Stott (guitar and vocals), David Butterworth (bass) and Ollie Felton (drums) and, despite their relative inexperience, they performed like seasoned veterans way beyond their years. Marrow and Stott were good on guitars if a little ropey at times with the vocals but with no disrespect to those two, Butterworth and Felton on bass and drums were exceptional.

Mixing well known covers such as 'Sweet Home Alabama' and 'Cry Me A River' with their own compositions they quickly won the crowd over, not an easy task for the 'warm up' act early in the evening.

Amanada Roberts, who had come to watch Voltage, was impressed, she said: "I thought they were excellent, it's really good to see such young talent."