From puppies to police dogs - a trainer's diary (Week three) 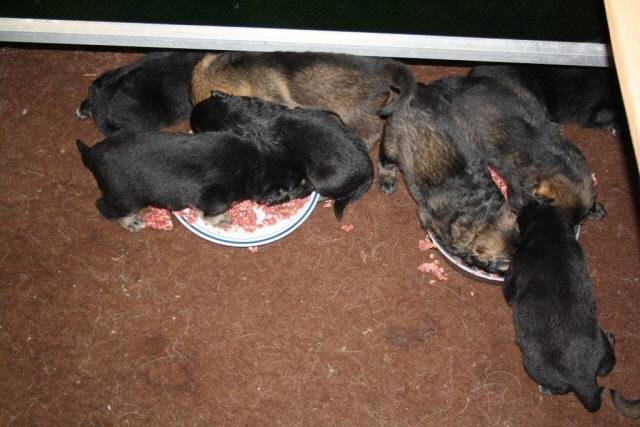 Following last week's second entry of ‘From puppies to police dogs - a trainer's diary’, here is the third instalment.

This week has been like a gradual awakening – almost like a film in slow motion. Crawling is becoming wobbly walking as they lift their little bodies whilst exploring the whelping box. The smallest female managed to climb out of the box and find mum. What a reward that was, she had mum and as much milk as she wanted all to herself. It didn’t last though as two days later we had to take out the front of the whelping box when more puppies were trying to climb out of the box to explore the world beyond.

The puppies are becoming more and more aware of one another and every now and then two puppies will engage in mouth wrestling. They are slow in their movements and clumsy when trying to target. It is interesting that up until now they have sought one another’s company and snuggled up close but as soon as they can see their siblings they want to play fight.

Half way through the week the puppies were introduced to solid food. They did not need much encouragement! As soon as they tasted the raw meat they gorged. Some of the more energetic puppies sprawled themselves across the food dishes covering the floor and themselves in mashed mince meat. The meat was sucked and sucked till exhausted they fell asleep around the food bowl.

Once the puppies were eating meat their development seemed to speed up somewhat and by the end of the week they were much more mobile and constantly off exploring. Very often the puppies would explore until they fell asleep and we were forever picking up isolated puppies and putting them on the blanket to sleep. We put blankets in 3 different places so that they were never far from a warm place to sleep but they seldom got to them.

Every day now we can see significant changes in their behaviour and physical capabilities. Next week they will meet Xena’s family and be introduced to the great outdoors so let’s hope this lovely weather holds.