From puppies to police dogs - a trainer's diary (week five) 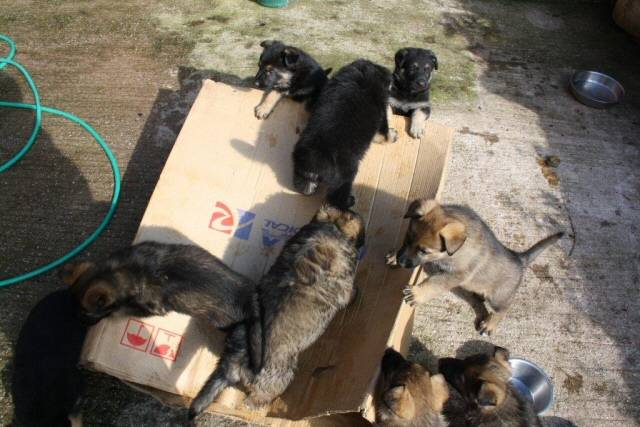 Following last week's fourth entry of ‘From puppies to police dogs - a trainer's diary’, here is the fifth instalment.

We christened this week the week of the plant pot. It is a time when the puppies are now more aware of surroundings and starting to explore objects. They direct play at objects by following, biting and carrying. Each day we add something different for them to experiment with and one of the first objects is a 3” plant pot. They are light and easy to carry although one rather enthusiastic puppy did manage to get a plant pot wedged on his face and amused us by trotting off, bumping into other puppies and furniture as he went.

One of the puppies (possibly my choice if I were to select a pup) is known as Little Dog. He is the smallest puppy in the litter but what he lacks in stature he makes up for in confidence. He is very sociable and always off exploring. He was the first to find the raw carrot which he immediately pounced on and scurried off with - his trophy protruding from his mouth like a huge orange cigar. Throughout the day the carrot was carried, rolled, argued over and nibbled by all the puppies.

Another playtime favourite has been the huge cardboard box that has become bent so that it resembles a long ski slope. The puppies scramble up the slope then stop and slide right back down to the bottom having to start the scramble all over again. One morning I was nearly late for a lesson when I became engrossed watching up to six puppies at a time playing on the slope.

As the puppies have become more agile and coordinated they have also become a lot quicker and very familiar with routes to and from the house, feeding areas, sleeping areas and doorways. They are also very familiar with humans seeking out social contact whenever they can. Every day visitors arrive to play with them and the biggest difference just lately is the way in which they mob people racing to follow them. This has made it increasingly difficult to get away from them. I demonstrated to my neighbour my tactic for escaping. First you get their attention and when the whole litter is chasing you round the yard you look for a clear run to the gate then like a flash you have to make a dash for the exit. My son leaps over the gate but I have to risk being caught when I stop to open the gate.

At the end of week five it was time for the puppies to say goodbye to mum who was going home back to her human family. Dave and another handler, Stuart arrived early Sunday morning. Xena was delighted to see Dave and as usual hurled herself at him leaping around in sheer delight. Over the past week Xena had spent the days with us away from the puppies and only spending the nights with them. She still fed them but more and more she was wandering off and the feeding times were becoming shorter. With sharp teeth and claws it was possibly becoming more uncomfortable for her and she certainly didn’t object to spending days in the garden rather than in the kitchen and yard with the puppies. She no longer responded to their cries or tried to get to them when she could hear them. A natural separation was already occurring.

Over the next two weeks we will be introducing more play opportunities and new areas to explore. We are great believers in mentally stimulating very young animals but also if the puppies are occupied with different experiences they spend less time fighting with one another. Puppy fighting is natural but it does get very intense and there are two particularly big puppies who like to throw their weight around. Next week they will be on safari as the garden areas are opened up to them.