From puppies to police dogs - a trainer's diary (week six) 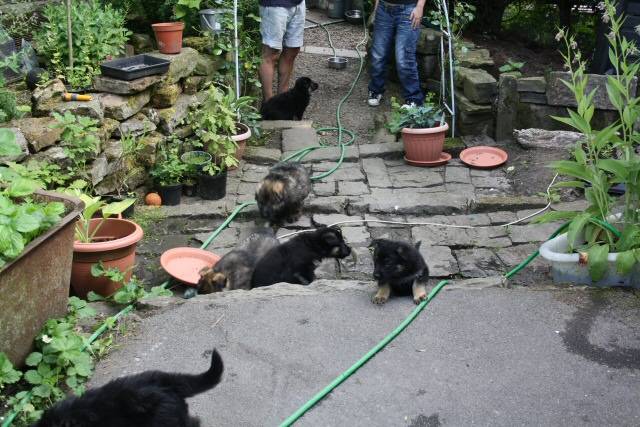 Following last week's fifth entry of ‘From puppies to police dogs - a trainer's diary’, here is the sixth instalment.

The puppies are now very enthusiastic about all visitors. They race up to the first pair of legs they see entering the house and to show how pleased they are they sink their sharp little teeth in to the visitors flesh usually in the ankle region. I have a pair of thick rubber wellingtons which I slip on before entering the puppy territory.

They love new and novel toys and will play for much longer periods of time but in order to keep them stimulated and distracted away from beating one another up they really need to explore new surroundings. With so many puppies Peter and I can’t go on manoeuvres alone. My son, Daniel and his girlfriend Chelsea gladly volunteered to help out. The four of us then guided the puppies out of the back yard and in to the garden area.

There was no stopping this mob, the puppies poured through the garden across the training area and straight on the school field. With little yips of excitement they chased Peter across the field. This was the first time they had met tarmac and grass but none of the puppies were fazed by their strange surroundings.

Once on the field they could really run and what fun they had. At one point three brave little puppies said farewell and off they went to seek their fortune. It was a worrying time for us as we were trying to keep them all together and these three just kept on going. To chase them would mean the rest of the puppies would follow so we stayed put and called. Finally they reached the horizon where ships fall off the end of Earth and wisely they decided to turn and head for home.

This was the longest we had ever seen them exert themselves and the whole of the time we were out there none of them wanted to rest.

When my puppy, Celt came on to the field all eyes turned to him. He is just nine weeks old but much bigger and stronger than these puppies. He has to be supervised and is not allowed to engage in rough play because of the size difference. However he is very good and inhibits his biting and playing to match these smaller opponents. Unfortunately everybody decided they loved Celt and started to mob him which was great fun at first but as Celt grew tired and the mob grew bigger we stepped in and picked him up whilst the mob dispersed.

At the end of this week when the puppies are just seven weeks Dave will return and the puppies will be put through the puppy test then taken to their new homes.