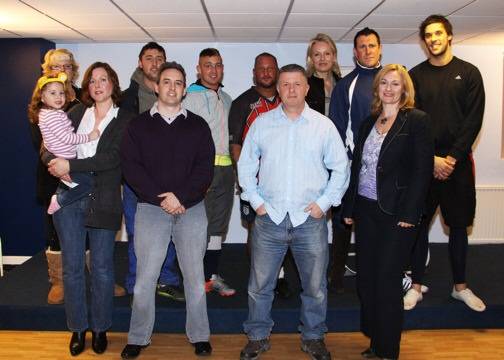 The 24-strong team of lads who are all aged between 18 and 37 – the ideal age to be sperm donors –were originally reluctant to consider becoming sperm donors. Only four members of the team were willing to become sperm donors at the start of the hour-long session, which was held at the club’s training ground in Castleton.

But after hearing from 42-year-old Manchester sperm donor Mark Jackson, and from Nottingham couple Sarah and Sean Betts, who had twins through donated sperm, a further 10 team members said they would look into becoming sperm donors themselves.

Joanne Adams, Senior Andrologist at Manchester Fertility Services, and Laura Witjens from the NGDT, explained to the players exactly what is involved in becoming a sperm donor. 500 sperm donors are needed every year in the UK to meet demand, but there is a rising shortage of donors across the country.

The ‘Strong Swimmers Challenge’ is part of the NGDT’s ‘Have You Got the Balls?’ sports-themed campaign, which targets men who otherwise may not consider becoming sperm donors.

Joanne Adams said: “It was very interesting to hear from the lads at the start of the session. Many of them had completely got their facts wrong about being a sperm donor, thinking that they were financially responsible for any resulting children, or that they would actually be paid for donating sperm.

“The event gave us a chance to show the boys in real terms what it’s like to be a sperm donor, and ultimately what your donation can achieve – namely giving someone a family which otherwise wouldn’t happen.”

Laura Witjens, from the NGDT, said: “It’s really reassuring to see lads in this age group considering becoming sperm donors. Many men this age don’t give it a second thought, so the fact that they are now thinking about it is really positive.”

21-year-old John Marsland from Castleton, Rochdale, who is a scrum half for Rochdale Mayfield Rugby Club, said: “We had no idea what the session was about beforehand, so we all gave a completely honest answer when asked if we’d donate sperm at the start.

“I originally said I wouldn’t, but when I saw the couple with the twins, and heard from Mark, it really showed me how important it is. I genuinely didn’t realise there was so few donors available, donating sperm was something that had never even crossed my mind.

“But I would hope that if I ever had a problem with infertility, then someone like Mark would be there for me. I’m definitely going to explore it further.”