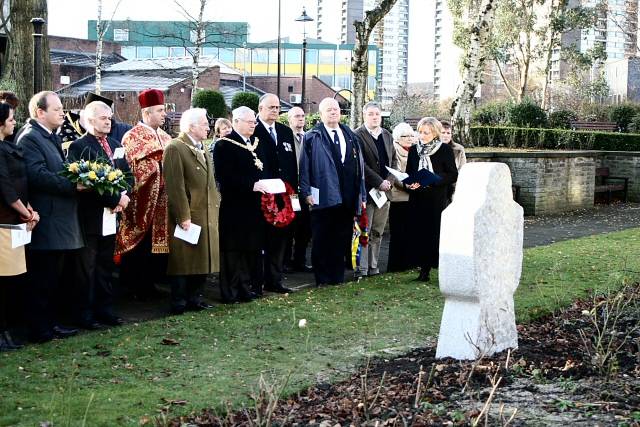 The Rochdale Friends of Lviv group and the Association of Ukrainians in Great Britain held a commemorative ceremony today (Friday 26 November 2010) at the Holodomor Memorial Stone to honour the victims of the ‘Holodomor’ genocide.

Members of the community joined together to commemorate the millions who were starved to death in the enforced famine in Ukraine.

Rochdale is the first town in the UK to have a memorial stone of this kind, which is situated in the Memorial Gardens.

Up to seven million Ukrainians were killed in the genocide between 1932-1933 and it was one of the most brutal acts carried out by the Soviet leader Joseph Stalin.

Those in attendance at the memorial ceremony included Simon Danczuk, MP for Rochdale, the Deputy Mayor of Rochdale, Councillor Alan Godson, local Councillors and members of the Ukrainian community.

Chairwoman of the Friends of Lviv, Anna Kecyk, spoke to the crowd about the importance of remembering the Holodomor.

Wreaths were then laid by the Deputy Mayor of Rochdale, Simon Danczuk Mp and the Mayor of Keighley Councillor Ian Wilson.

A one minute silence was observed followed by a memorial service led by Rev.Father Yaroslav Riy of the Ukrainian Catholic Church.

After the memorial service members of the community continued their remembrance events at the Ukrainian Centre on Mere Street.

Rochdale has been twinned with Lviv since 1992 and has organised various civic and cultural functions, as well as student and professional exchange programmes to celebrate the ties between the two towns.