You are Here: Home » News » News Headlines » Protestors march to Infirmary with ‘save our services’ message

Protestors march to Infirmary with ‘save our services’ message 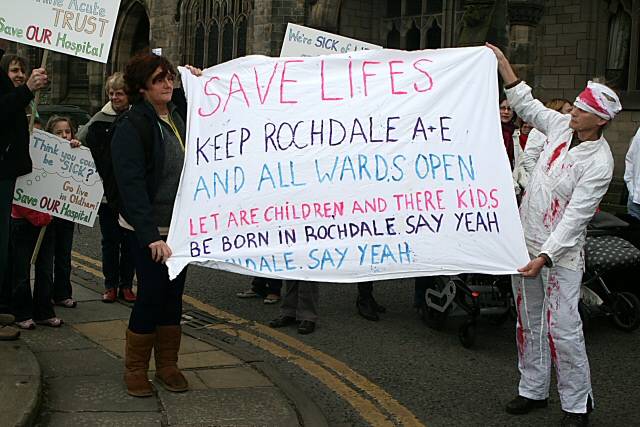 People from across the Borough, children, councillors and the Mayor of Rochdale took part in a public march today (Saturday 26 March 2011) as part of a bid to save services being scrapped from the Rochdale Infirmary.

Led by a piper, the protestors gathered at the Rochdale Town Hall and made their way to the Infirmary via St Mary’s Gate.

They held placards which read: ‘Dial 999 will you get there on time,’ ‘Rochdale needs local hospital services,’ ‘We’re sick of lies and broken promises’ and ‘About to give birth? Catch the bus to Oldham.’

The protest comes following a string of announcements from the Pennine Acute Trust which runs the Infirmary regarding closures at the hospital.

On 4 April the Infirmary will lose its Accident and Emergency department and will be replaced with an Urgent Care Centre.

The Maternity Unit will close in the summer which means babies will no longer be born in Rochdale.

A full time table of closures can be viewed here:

Councillor Jean Ashworth, organised the march, she said: “The aim today is to show that the people of this borough are not happy with the down grading of the Infirmary.

“Everything has been brought forward but there is nothing in place to support the changes they are making.

“It is very very frightening.

“In less than eight days we will have no emergency blue lights.

“The feeling amongst the public is one of absolute disgust. We are one of the most deprived areas and we are going to be left without full hospital services and people are expected t o travel further afield.

“The message to the Trust is to listen to the people and look at the changes again. Since the reconfiguration plans were approved our needs have changed so much. The birth rate has risen, the population has grown.

“Now new mums will have to register their child’s birth in Chadderton, our population figures will go down, we could lose our registrars, we could lose Government funding – there are implications all round.

“We are not just losing healthcare, we are losing everything that goes with it and that is leaving this borough so unsafe.

“The Trust has got to admit that they got it wrong. At the end of the day it is the people’s health service and the people don’t agree.”

Kate and Andy Bentley from Littleborough took part in the march with their two children who were both born at the Infirmary.

Mrs Bentley said: “It is a disgrace what they are trying to do to our Infirmary. Rochdale is a big town and it should have full hospital services.

“We live in Littleborough and if we dial 999 now we can be here (at the Infirmary) in five minutes – if we had to go to Oldham, Halifax of Bury that could be life threatening.”

Campaigner Shelia Mills added: “It is a big worry, especially if you can’t drive.”

Jane Stuckley who was at the march with her children said they were there to “save their birthplace.”

John Murray said he thinks the people of Rochdale and the surrounding areas have been let down. He added: “We are not being listened to.

“They (The Trust) should be thoroughly ashamed of themselves and what they have done against the people of Rochdale. I cannot see how they can sleep at night or show their faces.”

Parents Christina and Lee McCole know firsthand what a worry the loss of services in Rochdale mean for families. Their two week old baby stopped breathing and was rushed in an ambulance to Fairfield Hospital. The ambulance took 21 minutes to arrive. They believe if the ambulance had had to go to Oldham Hospital their baby would have died.

Mrs McCole said: “What is more important? A life or money? It is such a worry. Is anybody going to listen?”

The Leader of Rochdale Council, Councillor Colin Lambert, said: “The turnout should’ve and could’ve been bigger. The fight needs to grow and not shrink away.”

Councillor Lambert said he wants an “honest debate” from the Pennine Acute Trust regarding what services are available for the Rochdale people and if the Infirmary will close.

He said: “I don’t want a long philosophical answer I just want Mr Saxby to reassure us that the Infirmary won’t close – and if it does, then he will resign.

“I want the commitment to be with his job.”

The Mayor of Rochdale, Councillor Zulfiqar Ali said it was “fascinating” to see so many people turn out for the same aim and something which is a “concern to all of us.”

He added: “It shouldn’t stop here; they should continue to meet up and come up with a business plan. The Government are encouraging community schools – why can’t we encourage people to run a community hospital? This is something we need to look at.”

Councillors from Rossendale and Whitworth also attended. People living in those areas will be affected by the service cuts at Rochdale Infirmary. Their closest hospital is either in Blackburn or in Oldham.

Councillor Lynda Barnes said: “It was Healthy Futures in 2007 and it is no future in 2011.

“Basically the whole of Rossendale have been left without health care.”