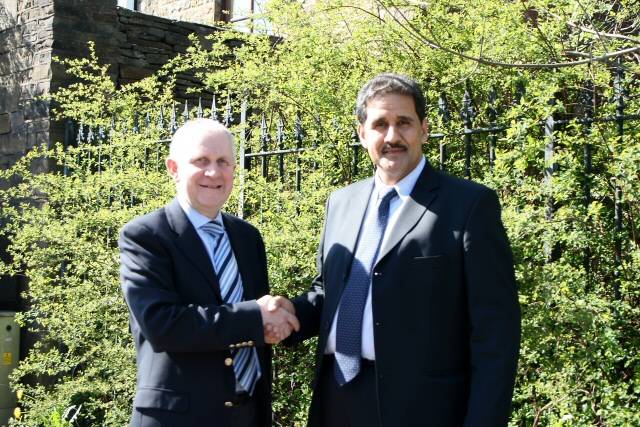 The Leader of the Conservative party, Councillor Ashley Dearnley with Councillor Shah Wazir

The Liberal Democrat party in Rochdale has lost another member.

He is the ninth person the party has lost since December. His move to the Conservative party comes in the wake of Councillor Mohammad Sharif’s move to the group last month.

The Leader of the Liberal Democrats, Councillor Irene Davidson, wrote to Councillor Wazir last night (7 April 2011) telling him he was “temporarily suspended” from the party following “serious allegations” about his conduct.

This letter was also sent to Rochdale Online.

However, Councillor Wazir had not received the letter when he was contacted by Rochdale Online.

He described it as a “desperate attempt.”

He said he had thought long and hard about leaving the group and handed in his resignation this morning.

Councillor Wazir understands that the Liberal Democrats learnt of his decision to join the Conservatives yesterday and that is why the letter was sent.

Councillor Wazir said: “The leadership of the Liberal Democrat party is now physically healthy but the party is politically sick and their house is not in order.”

Councillor Wazir said he thought the group had “let the town down” and the leadership has “never discussed the problems facing our communities.”

He added: “After losing so many Councillors they have never sat down to look at where they are going wrong and losing support. It is not the Liberal party I joined back in 1996. It is time to move on.”

He added: “The last six months have been difficult within the Liberal Democrat party and I have seriously considered leaving in the last six months. It was a well thought out and well planned decision.”

Councillor Wazir said he has joined the Conservative party because they “practice what they preach” and the leadership of the party is “honest and reliable.” He said he has spoken to members and residents and they are happy with his decision.

He said: “I ask the residents of Rochdale to join and support the Conservatives. They are the only party who can deliver a better future for Rochdale.”

Councillor Wazir said more Councillors are thinking of leaving the party. He added: “The Liberal Democrats need to get their house in order before mudslinging someone else.”

The Leader of the Conservative party, Councillor Ashley Dearnley said: “I am delighted that Shah Wazir has joined our party. It is very good news.”

Councillor Dearnley described having Councillor Wazir in his group as an “advantage” because of his “great knowledge and ability.”

He added: “I would be interested to know what these serious allegations are.

“No party enjoys it when a member defects – I know the feeling. I guess they suspended him before he resigned.”

The Liberal Democrat party declined to make any further comment.