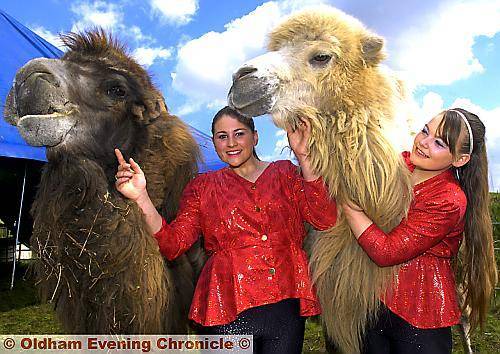 Kashmir and Sabia the camels with Madalane Timmis, left, and Cinzia Timmis

A Circus performing in Milnrow has defended itself against criticism that it exploits animals despite a protest outside the big top.

The recent high-profile case of Anne the Elephant — who is enjoying retirement at Longleat Safari Park after suffering abuse at Bobby Roberts Super Circus — has highlighted the use of animals for entertainment.

But Circus Mondao, performing at The Soccer Village in Milnrow until Monday, insists all its animals are well cared for.

As well as traditional entertainment like trapeze artists, clowns and plate spinners, the Lincolnshire-based family circus has horses, ponies, camels, llamas and zebras.

Animal rights groups have claimed that the animals are carted around in lorries and are constantly caged.

Last night, police were called to Wildhouse Lane when protesters set up a roadside display and used a megaphone to complain to visitors about the use of wild animals.

One supporter of the Captive Animals Protection Society said: “This protest has been widely publicised on Facebook. Consultation by Labour before the election showed that 95 per cent of people wanted a ban on animals in circuses. We have had a lot of support because of Bobby Roberts.”

But Mondao’s ring mistress Petra Jackson says the animals travel in purpose-built transporters, are out to graze all day and live in appropriately-sized paddocks. Only treats and positive reinforcements are used during training.

She said that staff are government-registered and licensed animal trainers and the circus is regularly inspected by animal welfare officers, trading standards, government vets and the RSPCA.

Ms Jackson said: “Our animals are much-loved working partners in our circus. It’s obvious that, if they were mistreated, we would not have the close relationship with them, which our audiences can clearly see.

“Our pets in the circus live a longer and more fulfilled life than their counterparts in zoos, safari parks and especially the wild. They have an active life, good conditions, exercise, training and a non-stressful environment.”

“Last week was full for every performance. It was absolutely fantastic. We have so many compliments about our animals and how well they look are looked after. We love to show our animals to people around the country.”

She attacked campaigners and the media for their criticism, saying she was determined to get rid of the cruel circus label imposed by animal activists.

“A lot of people have pets and they are totally opposed to that as well as police dogs, dogs for the blind and hearing dogs for the deaf.

“They don’t agree with animals being enslaved to humans. They are fanatical people and tar all circuses with the same brush.”