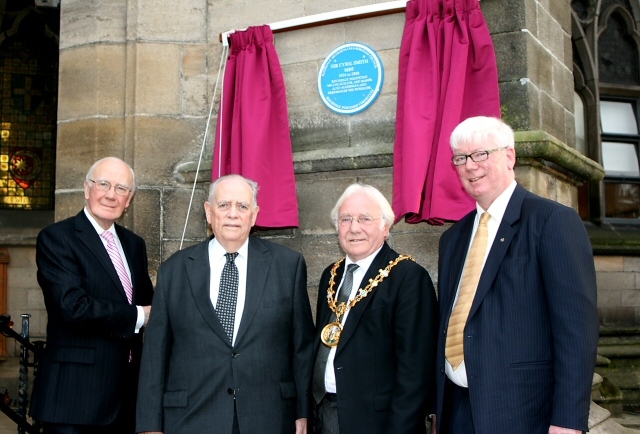 A blue plaque in memory of one of Rochdale’s most famous sons, Sir Cyril Smith MBE, has been installed at the Rochdale Town Hall.

The plaque was unveiled by Rt. Hon Sir Menzies Campbell MP at a special ceremony on Thursday evening.

Around 150 people, including family, friends, Councillors and politicians, gathered at the Town Hall for the unveiling of the plaque, which is situated on the front of the building above the Town Hall steps.

Mr Campbell described Sir Cyril as “remarkable” and said he was “proud” to be invited to unveil the plaque.

He said: “I remember him as a man of quick wittedness.

“He was universally admired in the House of Commons and universally feared when he was on a charge.

“He never lost his commitment to the community.”

Mr Campbell added: “This blue plaque is a proper legacy, not a memorial but a proper legacy to a great individual who I regard with great honour to have known and to have worked with.”

Sir Cyril’s brother, Norman Smith MBE, said: “The number of people here shows tribute to Cyril. If he was here he would be very pleased to see so many people here this afternoon.”

The idea for the plaque was instigated by Councillor Dale Mulgrew, because he felt Sir Cyril should be recognised and remembered in the town.

The Mayor of Rochdale, Councillor Alan Godson, added: “Cyril was 100 per cent through and through the son of Rochdale, he was Rochdale.”

Sir Cyril died last year at the age of 82 after he served as the Liberal and later Liberal Democrat MP for Rochdale between 1972 and 1992. He became famous for his distinctive appearance and frequent outspoken television appearances in the 1970s and 1980s.