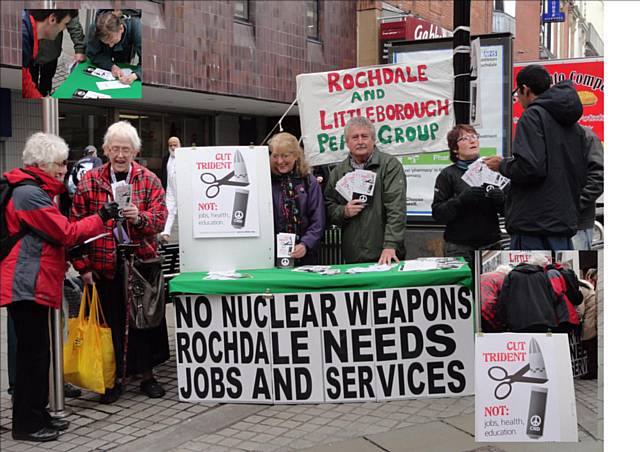 Rochdale and Littleborough Peace Group and supporters, Yorkshire Street 19 May 2012

Rochdale and Littleborough Peace Group leafleted in the town centre today (Saturday 19 May 2012) saying that ‘Rochdale needs jobs and services, not nuclear weapons’. They called for an immediate end to spending on the Trident nuclear weapons system and for the scrapping of expensive plans to upgrade it. They asked people to sign postcards from the Campaign for Nuclear Disarmament calling on MP Simon Danczuk to: “Please stop our precious money being spent on nuclear weapons.”

On behalf of the Peace Group, Philip Gilligan said: “People in Rochdale have now been on the sharp end of cuts in essential local services for several years. We have lost acute inpatient services across the board at Rochdale Infirmary, and our Council has been forced to slash tens of £millions from planned spending on services for some of the most vulnerable groups in our communities.

"Those signing our postcards included several people who told us harrowing stories of their own recent experiences; of jobs being downgraded so that experienced staff lose their jobs, of patients and service users receiving inadequate services.

"Yet, while vulnerable people receive worse services and committed workers lose their jobs, the Government, with support from the Labour Party’s national leadership, continues to squander £2.2 billion every year on the Trident nuclear weapons system and refuses to abandon plans to develop even deadlier nuclear weapons of mass destruction at an estimated cost of £97billion. This is money which could be spent on improving and defending the services we need.

"Based on population, Rochdale’s share of the current costs of Britain’s nuclear arsenal already amounts to £7million per year, but the staggering cost to Rochdale of so-called ’Trident Replacement’ totals over £300million. This is more than the Council would need to restore and maintain all local services at their previous uncut levels.

"Rochdale’s £300million could and should be spent, on essential health, education and social services. It is time to tell the government and all those who support retention of nuclear weapons that we want our taxes spent on decent local services not nuclear weapons.

“A nuclear- free Britain would be £billions better off. Trident is a dangerous waste of public money.”