You are Here: Home » News » News Headlines » Two injured in solvent fire at mill in Littleborough

Two injured in solvent fire at mill in Littleborough 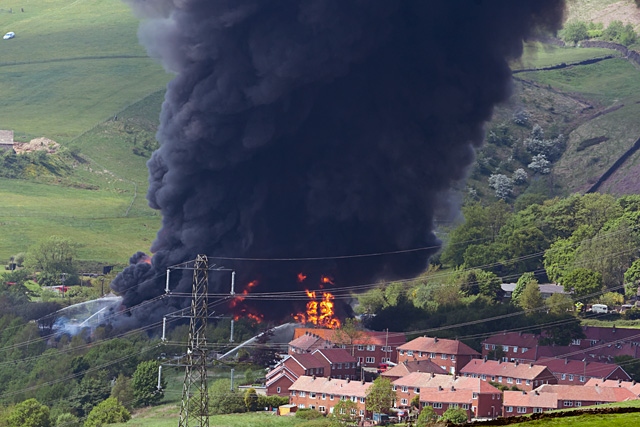 Fire at factory in Littleborough

Firefighters are tackling a blaze involving silos of solvents at a factory on Calderbrook Road, Littleborough.

Crews from Littleborough and Rochdale fire stations went to the scene and found a number of silos of solvent were on fire.

A nearby resident described hearing a "massive explosion".

A huge plume of thick black smoke can be seen for miles around.

Police have closed Calderdale Road and nearby residents are being evacuated.

Residents have been evacuated in Litteborough after the explosion at a paint factory started a huge blaze. Residents have also reported seeing bitumen flow 'like lava' down a street.

There have been reports of at least one serious injury - a man, thought to be in his twenties, was taken away in an air ambulance. A second man has also been taken to hospital after suffering burns to his face, legs and hands.

The blaze started at around half past twelve and residents say they heard a number of explosions before acrid black smoke started to plume into the sky. The blaze is still going on.

Stuart Littleford of Saddleworth, drove up to the area after seeing the smoke from his garden. He said: "When I arrived there were plumes of thick acrid black smoke rising into the sky.

"Police were evacuating everybody from the nearby houses due to concerns there would be an explosion.

"Shortly afterwards an air ambulance arrived to take away a casualty who had been seriously burnt in the fire.

"Police are all wearing masks to protect themselves from the smoke and fumes.

"There are concerns there are storage tanks full of fuel still in there which might explode so there is a police cordon around the area.”

Lee Hartley, 39, Sydney Gardens, returned home from work when he heard about the blaze. He said: “My mum rang me saying the factory’s just exploded.

"My dog’s in the house 60 yards from the factory but they won't let me rescue him because it’s not safe.

"My mum said she heard very loud explosions; all the house shook."

David O'Neill, who lives close to the factory on Shakespeare Close, heard the explosion. He said: "There was one hell of a bang at first then I looked out and saw flames and it seemed as if it were raining soot. The first explosion was huge, it was lucky no one was killed. Then there was explosion after explosion."

Fire at factory on Calderbrook Road, Littleborough on 28 May 2012