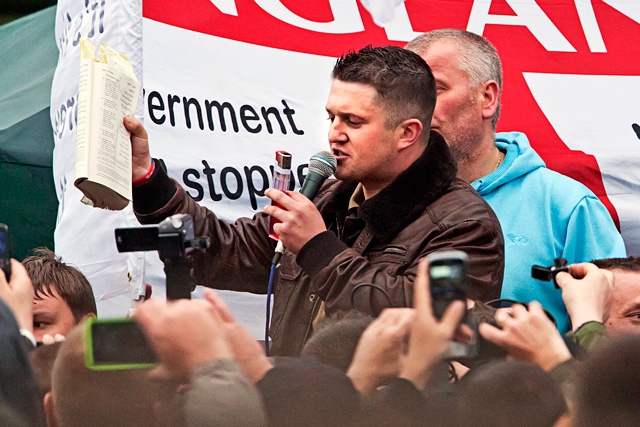 Leader of the EDL, Tommy Robinson speaking at the EDL demo in the town centre

Around 200 of the anticipated 600 EDL members arrived in Rochdale today for a protest.

The leader of the EDL, Tommy Robinson, was the main speaker. Mr Robinson said the EDL were in town to protest against "Muslim paedophiles" - referring to the men recently convicted of grooming and raping young local girls.

Hundreds of police officers were involved in an operation to keep the peace, including the tactical aid unit, police dog handlers and police horses.

The protest was relatively peaceful, although some fireworks were thrown and eleven people were arrested for public order offences.

Greater Manchester Police's Ch Supt John O'Hare said 11 arrests was "not uncommon for an event of that size".

He added: "I do think it is testament to the organisers themselves who worked with us to ensure the event passed off as peacefully as possible."

Council Leader, Colin Lambert, said: “The police have done a great job protecting the people of our borough and ensuring that today caused the minimum of disruption.

“I would like to thank the residents of this fantastic borough for continuing to demonstrate that people co-exist peacefully here and extreme far right views have no place. I’m also proud of the spirit showed by our businesses who continued to operate in challenging circumstances.”

Only a small number of locals turned up to watch the demonstration, something the Council attributed to community mediators and youth workers reassuring local residents.

Pam Smith, Executive Director at Rochdale Borough Council, added: “I’d like to thank everyone including community mediators and youth workers whose efforts in reassuring our residents and ensuring that young people stayed away from the protest were crucial to the success of this operation.

“This is a challenging time for our borough, but what comes across very strongly throughout is how united our communities are. Our sense of tolerance is something we are very proud of and no attempts by far right groups intent on causing unnecessary disruption will change this.”

A counter rally was held in Broadfield Park by 'Unity', a spokesman for the group said: "We condemn the cynical and dangerous attempt by racists and fascists in the English Defence League and British Nationalist Party to manipulate the horrific case of the sexual exploitation of young women in Rochdale in order to stir up Islamophobia and racial hatred in our community.

Join us, we currently meet virtually on Monday nights to chat, catch up with each other and plan where best we can help in the local community. You would be made very welcome. Click here to find out more.
Win a signed copy of Butcher Boy book