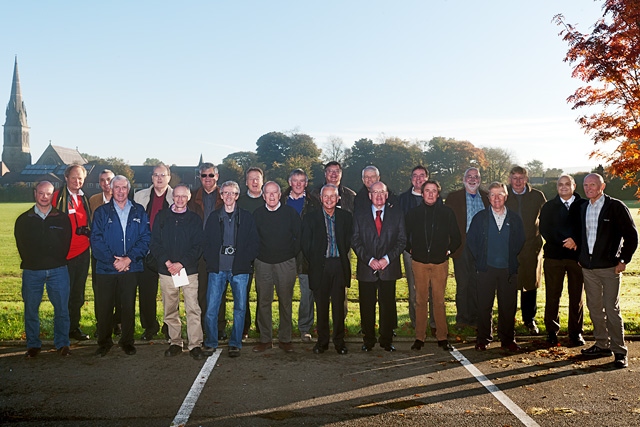 Former pupils of Rochdale Boys Grammar School travelled from as far away as Vancouver and South Africa to Rochdale last Saturday to celebrate the school’s heritage and to renew old friendships as well as take a last look at their old school before its closure and probable demolition next year.

The event attracted 42 ‘Old Boys’ together with friends and family who gathered together to talk of old times and take a guided tour of the school.

Tony Child, a published author who spent most of his working life caring for people with mental health issues, co-ordinated the event. He now lives in semi-retirement in Anglesey and told Rochdale Online: “The school had such an influence upon so many lives. I estimate that 5,500 pupils attended the school between its founding in 1953 and it becoming a comprehensive in 1964. Even after that time, something of the spirit and ethos remained.”

The event was attended by the Mayor, Jim Gartside and his Lady Mayoress who were very interested to hear of plans to set up ‘RGSB Alumni Bursary Fund'  which it is hoped will provide bursaries for pupils in the town seeking to improve their educational futures.

Mr Child, whose family once built boats in Rochdale and who also owned Child’s Monumental Masons on Bury Road, said that the school had turned out a real wealth of talent. Former alumni include Sir Joe Pilling, an ex-Head of the Prison Service, Brian Holden, CEO of Stagecoach and ‘Rich List’ member Sir Peter Ogden who once donated £50,000 to the school and whose wealth has now been estimated at over £200 million. He now owns Jethou; one of the Channel Islands.

Bill Oddie, former ‘Goodie’ and now ornithologist also attended the school, although he was not present at the event which concluded with a reunion dinner at the Crimble Hotel.

Mr Child said that one of the Old-Boys had turned up wearing the old yellow and green school scarf.

He added that many Rochdalians would remember the traditional ‘Pace Egg’ play put on every year in the Town Hall by members of Royds House which culminated in a blood-curdling feud between St George and the dragon.

Mr Child spoke of the impact that the school had on the town and also on the lives of its staff and pupils: “The "Old Boys" wish to thank the school, staff and education authorities for making it possible for ordinary working class lads to have had the opportunity to attend the Grammar School thus opening a whole new world of opportunity to us all. Many became very successful in many fields a testament itself to this.

“We have had a fantastic weekend together and wish to express our deepest gratitude and sincere thanks to everyone for making this happen.”