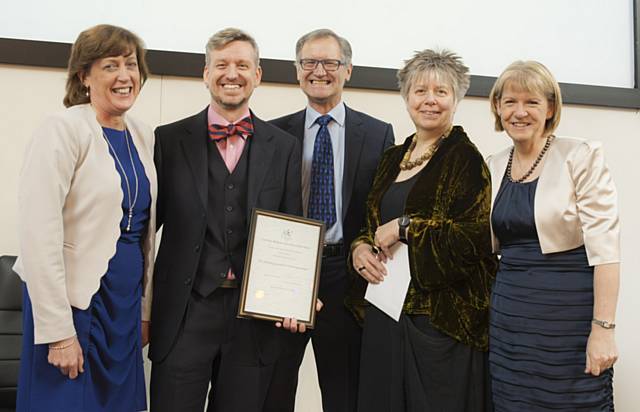 A Speech and Language Therapist from Heywood has won a national award for his work to help young children with language difficulties.

The trio developed a technique called BEST (Building Early Sentences Therapy), which they have been using with children aged between three and six for the past two years. BEST can be used to help children who speak different languages – something not all other techniques have been designed to do.

Commenting on his success Dr Pert said: “I was really delighted when I heard we had won the award. We’ve worked very hard to develop BEST in partnership with Newcastle University, and it’s an honour for us to have our work recognised in this way.

“The way BEST works is that it helps children to listen to adult speech and to figure out how sentences are constructed from the language they hear, which is the way most children learn to speak if their language develops normally.

“And because we do it this way means BEST can also be used when children speak another language too. Other methods designed to help young children are developed to work in one particular language so they can’t always be used to help a child who speaks another language.”

The therapy has been used with children in the Rochdale area, where there is a large Asian community and where many children speak a Pakistani heritage language such as Mirpuri, Punjabi or Urdu at home.

The youngsters typically have 16 sessions where they hear adult therapists say particular sentences whilst acting them out with toys. The adults then change one or more elements of the sentence so the child can learn how to use a different but similar sentence to describe something else. In this way, the children learn the rules about how to combine words into a range of different sentences.

Targeting language impairment in pre-school children is vital as research has shown that those children who start school with language difficulties are likely to have difficulties with literacy skills and learning in school. These difficulties can then lead to problems with employment and mental health in adulthood.