You are Here: Home » News » News Headlines » Next stop: Rochdale! 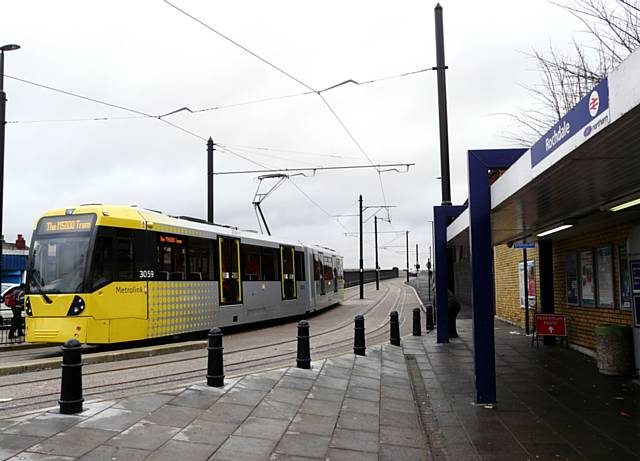 Metrolink services to Rochdale – the latest chapter of the network’s expansion – will open to passengers for the first time on Thursday 28 February.

Continuing on from the existing Oldham line at Shaw & Crompton, the 7.4km (4.6-mile) extension will run to Rochdale Railway Station, serving the former railway stations at Newhey and Milnrow and two brand new destinations: Kingsway and Newbold.

The first in-service tram from Rochdale Railway Station on Thursday will leave at 5.59am, while the first tram to Rochdale will leave Manchester Victoria at 6.08am.

More than 200 park-and-ride spaces will also be available to passengers travelling on Metrolink and heavy rail services from Rochdale.

Councillor Andrew Fender, Chair of the Transport for Greater Manchester Committee, said: “The Metrolink expansion continues apace and I am delighted that we are now only days away from services running to Rochdale for the first time.

“These new services will open up several new opportunities for communities along the line: for the very first time, people will be able to travel to and from the brand new stops at Kingsway and Newbold, and all on new trams and tracks.

“They will also be able to travel to and from the new stops at Monsall, Central Park, South Chadderton and Freehold that opened last year, and services will run through to Manchester city centre and on to Chorlton, calling at all stops in between.

“These are all new travel opportunities that weren’t available when this route operated as a traditional railway line.

“People in Rochdale will shortly have the best of both worlds: inter-regional and local rail services, and local tram services. Rochdale is undergoing great change, and Metrolink’s arrival is a great symbol of a bright future.”

Councillor Colin Lambert, Leader of Rochdale Borough Council, said: “The arrival of the Metrolink at Rochdale Railway Station marks a significant point in the development of this exciting project.

“The launch of services from Rochdale Railway Station will benefit residents and businesses in the area and presents a major boost to the local economy, as well as making our borough more accessible to visitors, investors and developers.

“A great deal of hard work has already gone into project and I am grateful to the community for their patience during the unavoidable disruption.

“The good news is that the extension of the line continues at a pace and it won’t be long before we can all enjoy the benefits it will bring once it arrives in the heart of our new town centre next year.”

The same tickets from Rochdale Railway Station to stops between Derker and Failsworth, including Oldham Mumps, will cost £2.10 and £3.60. Similarly, tickets to all stops in Manchester city centre (including Piccadilly and Deansgate-Castlefield) will cost £4.10 and £6.20 respectively.

A range of weekly, four-weekly, quarterly and annual season tickets will offer even greater value.

The 7.4km (4.6-mile) Rochdale extension will bring the total size of the Metrolink network to 69km (43 miles) and signals the midway point of a massive expansion of the network that is now well under way.

A further line – a second, 1.6km (1 mile) route through Manchester city centre – is also being progressed.