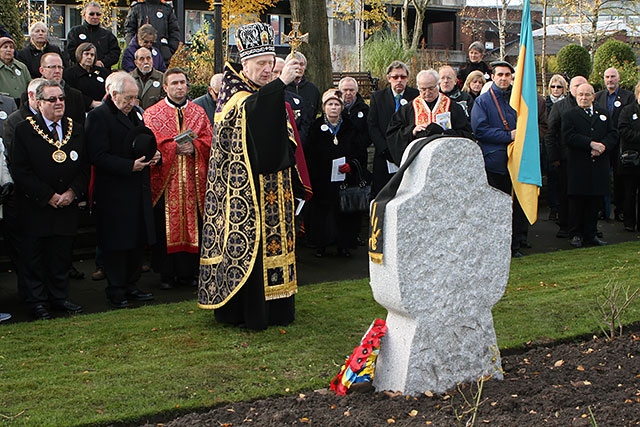 A service was held on Friday 22 November at the Rochdale Memorial Gardens to remember those who lost their lives in the Ukrainian Holodomor. The service marked the 80th anniversary of the Holodomor in which 7-10 million innocent men, women and children starved to death in theenforced famine between 1932 and 1933.

Rochdale MP Simon Danczuk who attended the service said: “It is important that we remember the many thousands of victims and the families of the Holodomor. Rochdale has strong links with Ukraine and it is right that we pay our respects to those people.

"All credit to Ann Kecyk and the other people involved who have organised today’s service.

"I have personally written to William Hague, the Foreign Secretary, asking that the British Government recognise this tragedy as genocide like many other countries have.”

The service included a procession from the Town Hall to the Holodomor Memorial located in the Memorial Gardens. Wreaths were laid at the Memorial by Mayor and Mayoress Rush, Simon Danczuk, Nigel Linsan Colley and the ex Mayor of Keighley, Mykola Lajszczuk. A one minute silence was also observed.

The service was dedicated to the 1930s Welsh journalist Gareth Jones, who exposed Stalin’s atrocities, and in memory of his niece, Dr Margaret Siriol Colley.

In attendance at the service was Gareth Jones’ great nephew, Nigel Linsan Colley. He said: “I am proud to keep discovering things about my great uncle that I didn’t know before.”

Gareth Jones witnessed the famine first hand and is now recognised as one of the first journalists to reveal the horror of the Holodomor in the early 1930s.