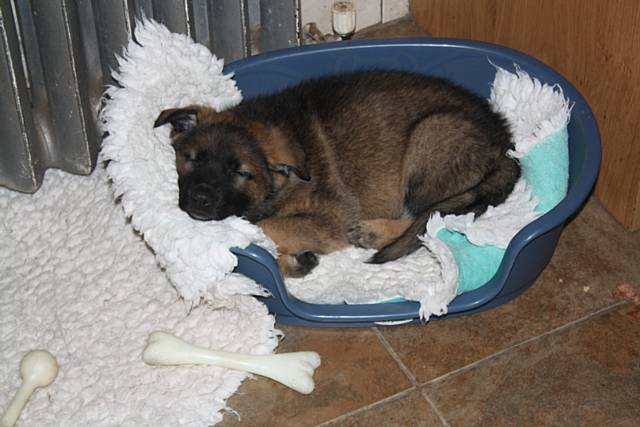 On Saturday 4 January 2014 a small, seven-week-old puppy was purchased from the Greater Manchester Police kennels and brought home to On Track Dog Training School.

Owner of On Track Dog Training, Cath Phillips said: "He is a grandson of my female German Shepherd, Pepper and comes from a long line of working dogs.

"Bred for purpose it is hoped that he will compete in IPO, which is a German dog sport.

"As a fully trained sport dog he will compete both here and abroad testing his skills in tracking, obedience, and protection work. It is very similar to the work a police dog is trained to do.

"Over the following weeks and months I shall compile a diary outlining the training that this young puppy is undergoing. The basic training will match the exercises puppies learn when they attend classes at On Track and will hopefully be of benefit to those of you who are also training young dogs.

"When puppy arrived home everything was ready – his bed, puppy pen, food, water bowl and chew toys. He was allowed to explore the kitchen and once he was confidently playing with the toys he was given his first meal.

"For the rest of the day he was kept in the kitchen where he played, ate and slept.

"Every time he woke, finished a meal or had been playing for a while he was taken into the yard to toilet.

"When he was asleep he was left in the kitchen on his own but as soon as he woke and before he made any noise we returned to take him outside to toilet.

"By evening he was very familiar with the kitchen and was used to being left for short periods. He knew where his bed, toys and water bowl were positioned.

"He also knew the route to the backdoor to go in to the yard to toilet where he received a piece of meat every time he performed.

"We stayed up late with him and then gave him a tripe stick to chew on his bed whilst we crept off to bed.

"Puppy slept well but Peter and I were up early to take him out before he woke properly and made a noise.

"If a puppy does get upset during the night I will go down and take it to the toilet then give it something to chew before leaving it once more. I don’t play with them or make a big fuss it is really to see to the puppy’s needs and reassure it that it is not totally alone.

"The following day we took him a walk with one of our other dogs. It is better if the puppy and resident dog can meet away from the house on a walk where both dogs can be supervised to prevent the puppy from rushing at the other dog and jumping up at it.

"It was a very cold frosty morning so the puppy needed a warm coat. It was a good opportunity to get him used to wearing a coat and later a harness. His attention was on the other dog and the strange surroundings so he did not try to bite his coat.

"After the walk the resident dog is quite happy to have this new puppy in the house but they are always supervised. I never leave a young puppy alone with an adult dog. This procedure was repeated with each of my other adult dogs.

"After the first two days the puppy had settled in well so I was keen to get him out and about. He has not had his inoculations so I have to be careful where we take him. We pick places where there are no dogs but plenty of people and novel surroundings.

"I don’t put a collar and lead on young puppies as there is always the risk of the puppy becoming hand shy every time someone grabs at the collar.

"The other problem is that puppies don’t yet know how to walk on a lead so are apt to sit and not budge followed by a sudden rush forward jolting their necks when they reach the end of the lead.

"To prevent whip lash the puppy wears a harness with a long line attached. In this way he is safe because I can catch him quickly if I need to and there is no pressure on the neck. It is also a great way of teaching the young puppy a recall. Peter holds the line whilst I run off, I then call the puppy from a distance allowing the puppy to run as fast as he can to get to me and the tasty meat we use for a reward. The line can be used in an emergency to catch the puppy if it suddenly sees something.

"I never allow a puppy to run up to a strange dog or go over to sniff a strange dog. He will meet plenty of friendly dogs at a distance but he will only interact with those dogs I know well and trust.

"Sometimes it is necessary to walk the puppy along the pavement next to the road. For this the puppy needs to learn to walk next to my left leg on a short lead. This is probably one of the most difficult exercises to teach and yet it needs to be learnt early on in the puppy’s life.

"I find a front fitting harness such as an Easy Walk harness is ideal for teaching the puppy to walk by your side. In the photograph the puppy is wearing an Easy Walk and you can see that the lead is attached to the front of the harness on the puppy’s chest. This gently stops him pulling and guides him. The use of treats lets the puppy know when he is in the right position. Owners are shown how to use this harness in the beginner classes.

"Now puppy can walk on a lead by my side and come back when called he is ready to go for longer walks where he can practice these skills where there are distractions.

"There are lots of things puppy needs to learn and the puppy diary will follow the progress of this training.

"Now we have got to know the puppy we have chosen a name for him – Kato, which in Latin means wise."