You are Here: Home » News » News Headlines » Rochdale's skyline will alter dramatically as the dominating architectural feature of the town centre of the past 36 years disappears 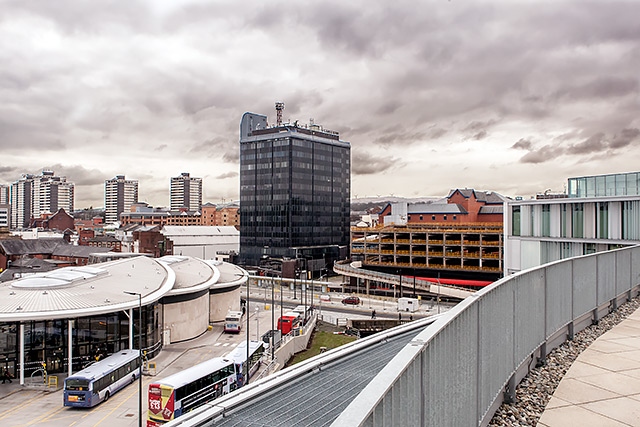 With demolition of the black box and old bus station under way, this view of Rochdale will soon be no more

The Rochdale Town Centre skyline has changed dramatically over the past two years with the building of Number One Riverside and the Transport Interchange, and with the demolition of the old municipal building - the 'Black Box' - and the old bus station now underway, the skyline will change even more dramatically as the dominating architectural feature of the town centre of the past 36 years disappears.

Construction of the Black Box and the adjoining bus station, designed by architects Essex, Goodman & Suggit, was started in October 1975, completed in April 1978 and officially opened in May 1978 - the offices were ready for use the following year.

There will be few in Rochdale who will lament the demolition of a building that has long been considered a blot on the town centre landscape, many who worked in it disliked it as much as those who had to visit it.

The bus station was in its day back in the 70s Greater Manchester Passenger Transport Executive's second purpose built bus station, however, over recent years it too had become an eyesore that was considered seriously user unfriendly.

Those of a certain age will remember that when it opened, within the footprint there was also a pub, The Travellers Rest, SaverSales and Information offices, a café, dry cleaners, clothing shop and a newsagents. Escalators linked the concourse with the town centre, via a footbridge from the car park. Access to the buses was at street level or via subways, avoided as often as possible by wary pedestrians!

Connel Brothers, the company brought in to do the demolition, expect the job to take 34 weeks to complete, with the bus station first to be demolished followed by the Black Box.

However, the space left by the demolition of the buildings is earmarked for a major new retail and leisure development and hence in years to come the skyline and street scene will change again.