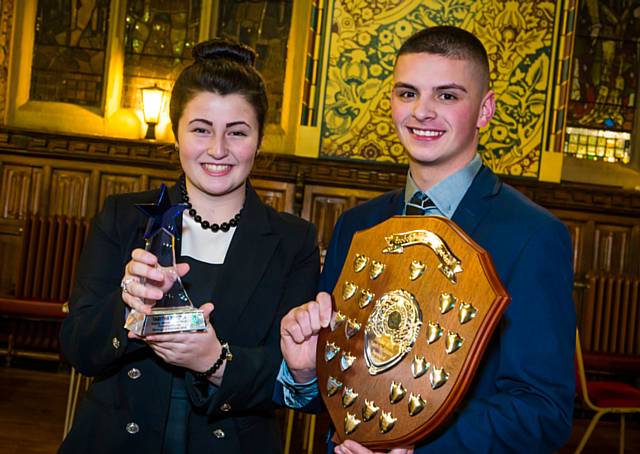 Leon Hollinrake, 17, was officially announced as Rochdale’s new member of the Youth Parliament at a ceremony at Rochdale Town Hall on Wednesday 5 February.

A former Kingsway Park high school student, Leon beat five other candidates to the post with over 9,000 came from secondary schools and sixth form colleges in the borough.

Leon, who is studying for a Level 3 Btec in Sports at Bury College, won 29% of votes with his manifesto. He promised to: change the school curriculum to better prepare young people for life outside of school; secure the vote for 16 and 17 year olds and to make more bursaries available for young people in education.

In his video pledge, Leon said: “It is my strong belief that every young person should have an equal opportunity in life, regardless of race, religion or culture. Rochdale borough needs a fair minded young person to make our lives, and those of future generations, better.”

Tabitha Rusden was elected as Deputy MYP, and will support Leon throughout his one year term representing the interests of the borough's young people locally, regionally and nationally.

Council Leader Colin Lambert said: “There is a great tradition of strong candidates for Rochdale’s Member of Youth Parliament, and I’m delighted at the amount of thought and passion put into all six manifestos by the young people who put themselves forward for this role.

"Leon’s new responsibilities will see him meet some of the most influential people not just in Rochdale, but in the country.

"As representatives for our region’s youth, Leon and Tabitha are the voices of our future and it is hugely important that our councillors and MPs listen carefully to what they have to say.”