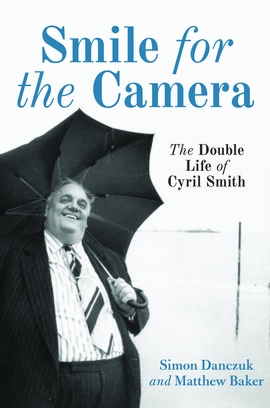 Smile For The Camera - The double life of Cyril Smith

In preparation for this review, I re-read ‘Big Cyril’ by Cyril Smith published in 1977 by Wyndam (second-hand copies still available from the usual online sources from £2.00).

The new book is an easy read in a narrative style and I managed to get through it in about four hours. At a hardback cover price of £18.99, the cash-conscious Rochdalian may wish to wait until the paperback version is released.

If you are looking for a one-sided demolition of Smith by the sitting Labour MP, Simon Danczuk, you will be disappointed. The book is surprisingly balanced and gives generous credit to Smith for his political acumen and organising skills together with his great energy and ability to build a formidable party machine in a previously staunch Labour town.

The dark side of Smith has now overshadowed the fact that he was also a human being who struggled against great odds to achieve both local and national recognition for his talents; particularly when it came to organising energetic election campaigns and for connecting with the man and woman in the street. As the book goes on to explain, this came at a dreadful price for his many victims.

The Danczuk-Baker book is a bold and genuine attempt to fill in some of the gaps in the myth of Smith and to present us with a more rounded picture than Smith’s own book offered to us 37 years ago. Smith’s own book was written when he was less than half way through his Parliamentary career and although the largely ghost-written offering is both lively and enjoyable, the gaps are palpable. You will discover minutiae such as which butcher he bought his meat from but will search in vain for any mention of Cambridge House, Knowl View or of various police investigations. As it was written only two years before the Rochdale Alternative Press blew the story on his sordid activities in 1979, Smith was by then well advanced in his sordid double life of sexual and physical assaults on vulnerable children and this was well known to the police; the first concerns mentioned in police files dating from as early as 1961.

I must put my cards on the table here, I lived only two streets away from Cambridge House in the mid-1960s and used to go over there regularly together with my friend to play snooker with the residents. I was aware even then as a 13-14 year old of the nudge-nudge, wink-wink stories of ‘the Fat Man’ even though I did not understand the implications.

In 1974, I had a brother who was a resident there for some time, although its use had then changed and Smith had gone on to pastures new. In my view, the stories about Smith must have been well known locally well before RAP published yet none of this stymied his later meteoric rise and his sordid criminal activities.

To me, the book exposes most of all Smith’s viciousness and his capacity for a lack of forgiveness for those who either crossed him or refused to hang on to his coat tails. His old friend, political agent and fellow QE2 companion Rodney Stott suffered more perhaps in this respect than any other. In his political life, as with his twisted sexual persona, Smith could be vicious, cruel and unforgiving.

Few people in the book come out of it with any real credit in terms of standing up to him, although Elwyn Watkins was one of the few to challenge Smith’s right to incorporate his own personal wish-lists into official party policy. For this, Watkins deserves much credit.

The saddest part in the book for me, apart from the harrowing tales of some of his victims, is how Smith, whose arrogance knew no bounds, strove for years to pass on his political legacy to others; his Chosen Elect, notably the so-called Magnificent Seven local Lib Dem activists who would troop dutifully round to Emma Street to receive their instructions at the feet of the Master. The later implosion of the local party put an end to all this.

In some ways of course, most of us supported the myth in some way. Many of us were secretly if not overtly proud of our most famous son and delighted in his ability to tell some pompous ass how it was in language that we knew and understood. I still recall a twinge of guilt that I voted for him in the by-election and in some way, contributed to his belief in his infallibility.

Could Smith ever have become leader of the then Liberal Party? There were certainly times when such a thing seemed possible. However, to be a real leader means that you have to listen to people and to carry them with you. You also need to avoid making enemies unnecessarily. In these respects, I think that Smith’s massive ego would have got in the way of his ambitions. As he admitted early on in ‘Big Cyril’ he loved power and that can be the most dangerous drug of all. I am no psychologist but as we all know, sex and power are very closely related and in the accounts of his victims, what comes across is not so much the sexual gratification as the opportunity to exercise absolute and overwhelming power. By choosing his vulnerable victims carefully, Smith was to wield his warped persona with evil and destructive effect.

To me, the Danczuk-Baker book would have been strengthened by a closer examination of the roles played by others who must have known what Smith was up to but chose to ignore it and perhaps could have done more research into the period when Smith visited the notorious Elm Guest House in London where the sexual abuse of minors went hand-in-hand with international child trafficking, drug abuse and the more violent forms of sado-masochistic abuse. There is still here, a tale to be told.

The Danczuk-Baker book merits close attention and ‘Big Cyril’ is well worth another read. The two taken together present us with a rounded portrait of a man with great talent and energy, driven by a great sense of self belief who was riddled with flaws as deep as the blue veins running through a piece of Stilton.

Smile for the Camera: The Double Life of Cyril Smith is published by Biteback Publishing at £18.99