You are Here: Home » News » News Headlines » 'And She Cried' - film inspired by the hate crime killing of Sophie Lancaster premières in Rochdale 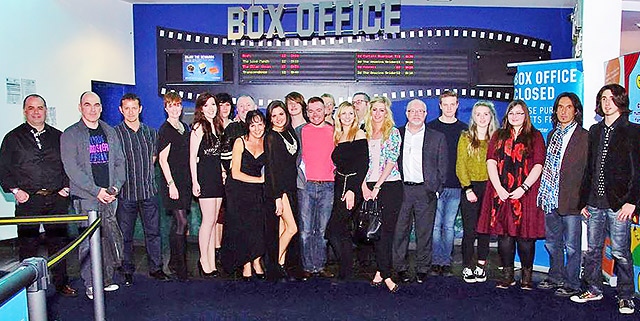 Cast and crew at the première of 'And She Cried'

The Odeon Cinema in Rochdale played host to the film première of a film inspired by Sophie Lancaster.

The Sophie Lancaster Foundation, cast, crew, special guests and Mayor of Rochdale Peter Rush were all in attendance to watch a screening of 'And She Cried', a film inspired by the hate crime killing of Sophie.

Writer and Director John Farrington said: “The première was fantastic. We had a full house and everyone who said they would come along did. The Sophie Lancaster Foundation came along as well and they were the most important guests of the night.”

The film was made by Rochdale based company Leaky Shed Films and was largely filmed in and around Rochdale.

John added: “The majority of the film was shot in Rochdale and that was a great experience. We had a lot of support from the community and the
Council was great in letting us film. Rochdale has been really supportive over the whole project.”

Sophie died in 2007 from 20 injuries after she was attacked by a group of teenagers in a park in Bacup. Five teenagers were later jailed for their role in the killing with two imprisoned for murder.

Work on the film came from John’s work with the Sophie Lancaster Foundation. He said: “We were working on doing some film workshops and
we put a request out and got about 90 responses back so decided from there to just make a film ourselves.”

The film was produced with no budget with £100,000 worth of equipment provided by major cinematic companies.

“We have had a really positive response to the film. This is the first feature film I have done so I was initially nervous but the feedback we have received has been great,” said John.

During the première, a collection amongst the audience raised £200 for the Sophie Lancaster Foundation and a further £200 to be shared between the NSPCC and the Variety Club – two charities nominated by the Odeon.