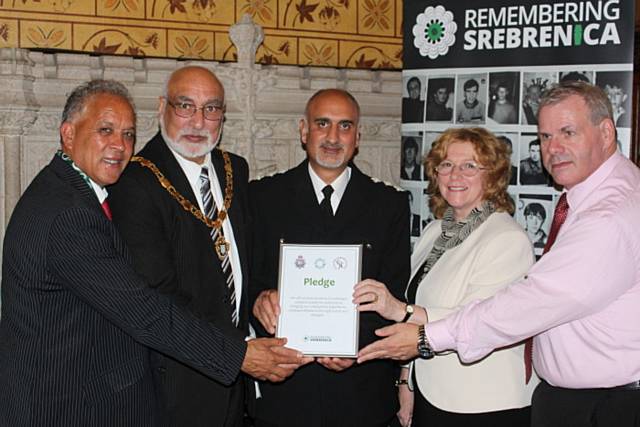 Deputy Mayor Councillor Surinder Biant, Rochdale MP Simon Danczuk and Council Leader Councillor Richard Farnell were joined by individuals, organisations and dignitaries from across the borough at Rochdale Town Hall on Friday for an event to mark Srebrenica Memorial Day.

Guests at the event also signed a pledge asking them to commit themselves to “creating a cohesive society for everyone by bringing communities together to celebrate difference through events and dialogue”.

The event helped to awareness of alternative methods of reporting hate crime and attendees were encouraged to learn more about the importance of diversity and of connecting with neighbours and fellow borough residents of different backgrounds.

Councillor Biant, Mr Danczuk, Chief Inspector Nadeem Mir, Inspector Umer Khan, Councillor Daalat Ali, Irfan Chishti of the Rochdale Council of Mosques, representatives of the Srebrenica survivors and of the Rochdale Multi-Faith Partnership delivered speeches to a packed audience, who also observed a two-minute silence to remember those who perished during the atrocities.

Councillor Ali said: “It was a sombre yet thought-provoking event for all who attended and it provided a fitting tribute to the victims of Srebrenica. We were privileged to hear from relatives of Srebrenica survivors and learnt important lessons about cohesion from their experiences.”

The event also helped to awareness of alternative methods of reporting hate crime and attendees were encouraged to learn more about the importance of diversity and of connecting with neighbours and fellow borough residents of different backgrounds.

The event commemorated the atrocities of July 1995, when General Ratko Mladić and his Serbian paramilitary units overran and captured the Bosnian town of Srebrenica, despite its designation as an area “free from any armed attack or any other hostile act”.

In the days following Srebrenica’s fall, more than 8,000 Bosnian Muslim men and boys were systematically massacred and buried in mass graves.

Thousands of women, children and elderly people were forcibly deported and a large number of women were raped.

It was the greatest atrocity on European soil since the Second World War.