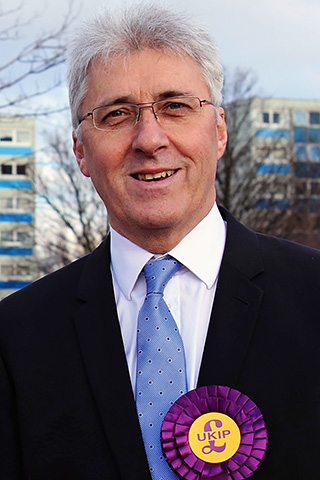 UKIP has announced that their candidate to contest the forthcoming parliamentary by-election in Heywood and Middleton is John Bickley.

Mr Bickley said: “I'm honoured to have been asked to represent the party.

“It is a Labour stronghold where by pure coincidence I actually lived for a while as a small boy.

“I am looking forward to getting out and about and talking to voters and explaining why UKIP is the only party that really represents their interests now.”

This will be second by-election he has contested this year as he was UKIP’s candidate in the Wythenshawe and Sale East by-election, where he came second.

He began his working career with a Manchester based company as a laboratory technician. After five years John joined EMI Records representing them in the North West before moving to London in the early ‘80’s and working for a number of music and video film companies at a senior level.

He returned to the North West in 1992 to take up a senior position with a Liverpool based computer and video games company. He now runs his own software company and has diverse experience of international markets in music, film, video games and technology software.

He is a father-of-two and his wife works as a part-time carer at a special needs school. His own father was a staunch Labour supporter and trade union member.

John joined UKIP three years ago and has been an active member of the party's Cheshire West branch. His interests apart from politics include walking.

Deputy Party Leader Paul Nuttall, local MEP, said, "I am delighted that John is our candidate in the forthcoming parliamentary election in Heywood and Middleton.

"He is an excellent communicator and a highly motivated energetic individual who is passionate in his beliefs. He is always prepared to go the extra mile and will give this campaign his heart and soul."