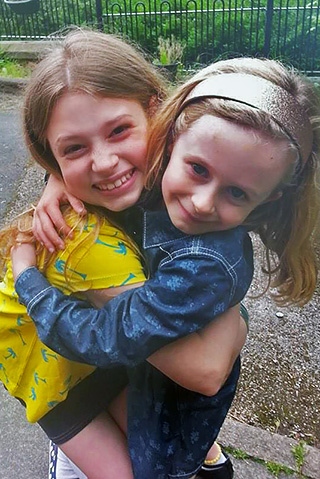 Sisters Jessica Kennerley and Ellicia Grace Baker who have EDS

A support group to help those with Ehlers Danlos Syndrome (EDS) has been set up in Rochdale by former Smithy Bridge resident, Rachel Hastie to help raise awareness of the condition as well as fighting for a blood test for her daughter Ellicia Grace.

Rachel said: “My youngest daughter is showing the signs of life threatening Vascular EDS but due to the cost, the NHS won’t do a blood test. It costs around £3,000 for the blood test so it is a significant amount of money.”

EDS is a collection of inherited conditions which fit into a large group, known as heritable disorders of connective tissue.

Rachel and her two daughters both suffer with the life-limiting condition which affects almost every organ in the body and can cause daily pain and fatigue, along with serious complications.

She added: “My oldest daughter, Jessica isn’t too bad with it at the minute so it is really about getting this blood test for my youngest daughter. With Vascular EDS people don’t tend to live past middle age.”

The first fundraiser held by the group at Dearnley Methodist Church received a lot of support.

“We had a lot of support from the church and there were a number of people there who have EDS. It is also about helping people who think they may have the condition because it can be a hard condition to diagnose,” said Rachel.