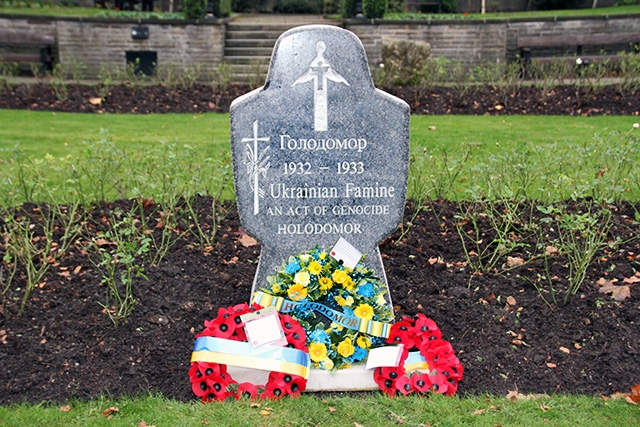 A service was on Friday (21 November) in remembrance of the 7-10 million innocent, men, women and children who were killed during the Ukraine Holodomor from 1932-1933.

The service, held at the Holodomor Memorial in the Rochdale Memorial Gardens marked the 81st anniversary of the forced famine.

The service began with a procession from Rochdale Town Hall to the Memorial Gardens which, included the Mayor and Mayoress of Rochdale, Rochdale MP Simon Danczuk, the Leader of Rochdale Council, Councillor Richard Farnell, local councillors and residents who wanted to pay their respects.

Once at the memorial, Chairwoman of the Friends of Lviv/Holodomor Committee, Anna Kecyk addressed those in attendance.

Wreaths were then laid by Mayor Carol Wardle and Mayoress Beverley Place, Rochdale MP Simon Danczuk and Anna Lyssejko from the Rochdale Friends of Lviv.

A one minute silence was then observed.

A service of remembrance was then lead by Rev Father Yaroslav Riy, Rev Father Volodymyr Sampara and The Rev Canon Alan Shackleton.