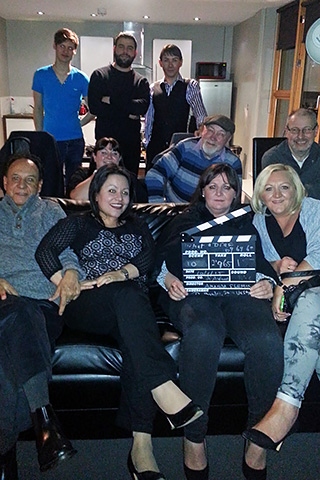 Guests at the screening of the film What A Drag

Rochdale actress and director Amanda Fleming held a screening of her latest film ‘What a Drag’ on Saturday 10 January.

The film, which looks at the lifestyle of drag queens, is the first film to be directed by Amanda and was screened to a specially invited audience.

Speaking about the screening, Amanda said: “It was a fantastic night. We ended up doing two screenings so everyone could come and everyone left happy. It was a really great night.”

Held in a Penthouse apartment owned by City Warehouse Apartments in Manchester, guests were treated to a screening of the film and a question and answer session.

Amanda also raised £1,500 to help her with her next project as well as allowing her to fund a camera.

“The money raised will allow me to fund my next project and buy a camera. There is a Canon camera that I am looking at that I can attach a boom mic to and it is a hi-definition camera so it will really help,” added Amanda.

‘What a Drag’ is a 30 minute comedy docudrama and has been selected for a number of film festivals.

Now that Amanda has directed her first film, she has been bitten by the bug and is hoping to direct more.

She added: “I still love acting, don’t get me wrong, but now that I have directed I think I am moving to become more of a director and producer. I think I would like to be like Mel Brooks who always had a cameo in his films so then that way I am not leaving acting behind.”