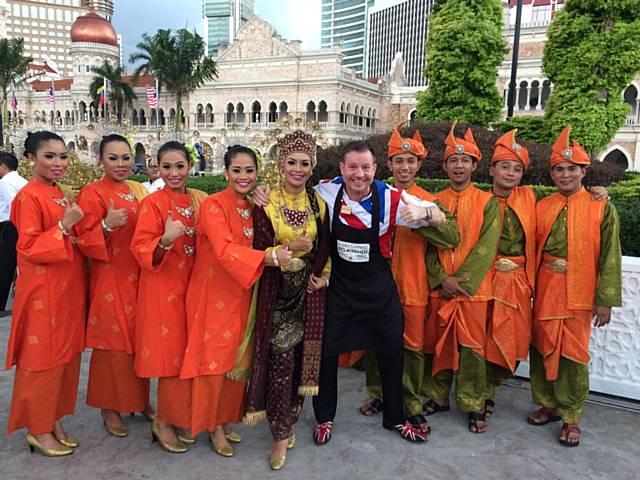 Andrew Nutter at The Big Kitchen Festival in Kuala Lumpur

Award winning local chef Andrew Nutter was amongst a host of international chefs who were flown into Kuala Lumpur to showcase their talents at the inaugural Big Kitchen Festival.

Andrew is used to performing on an international stage as previous festivals he has been involved with have included demonstrations in Cape Town, Dubai and Johannesburg, but even he was amazed by the sheer scale of the event, which saw his image pasted on billboards across the city.

During his time in Kuala Lumpur, Andrew had the honour of being introduced to the Queen, Tuanku Hajah Haminah binti Hamidun, Her Royal Highness, Tengku Puan Pahang and The Mayor YBhg, Datuk Seri Hj, Ahmad Phesal bin Hj.

The city of Kuala Lumpur lit up as Merdeka Square came alive with the sights and smells of local and international gastronomic delights at the festival.

Kuala Lumpur City Hall, in partnership with the Ministry of Tourism and Culture, presented the three day food festival that showcased the diversity of cuisine available in Kuala Lumpur, whilst promoting the city as a gastronomic destination in South East Asia.

Local and foreign foodies had the opportunity to get together and share their passion of gastronomy, whilst learning cooking techniques and tips from Malaysian and international chefs and food experts.